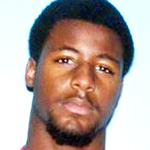 According to the DOC, Jeramie Solomon, 18, was seen by corrections officers, near the facility’s perimeter fence.

“At approximately 3 a.m. Friday, a corrections officer manning the prison’s tower observed the suspect near the fence and wearing black clothing,” DOC Public Relations Officer Bob Horton said. “When questioned by the officer, the suspect attempted to flee but was detained by the prison’s K-9 unit.

Solomon has been charged with drug trafficking and prohibited activity on state prison property, and was taken to the Escambia County Jail following his arrest.