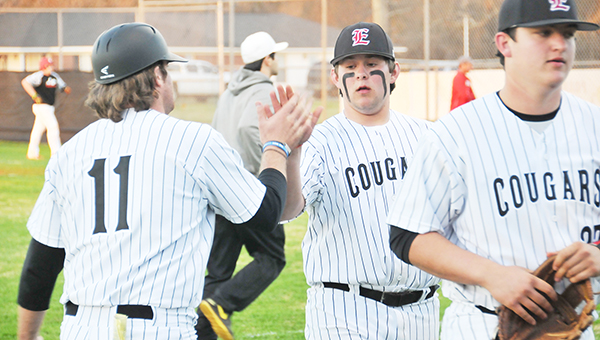 Escambia Academy is putting its tournament appearance at the Elton Reece Pepsi Baseball Classic last weekend in the rear view mirror as the Cougars gear up for a five-game slate this week.

The Cougars played Rocky Bayou, Fla., on Monday, and Pike Liberal Arts in region play on Tuesday. Tomorrow, Thurs., March 3, EA hosts rival Monroe Academy. The five-game slate will end on Saturday at home in a doubleheader against Morgan Academy.

During the tournament last weekend, the Cougars tied with Coosa Valley, 3-3, due to the time limit, and fell 1-0 to North River.

EA coach Jeff Price said the boys led 3-1 over Coosa going into the last inning, but had a couple of errors that led to a couple runs.

Against NR, Price said the Cougars got outplayed.

“We made about eight errors,” he said. “It was a late game, and it was freezing cold. We couldn’t make a couple plays that we needed to. Like I told them, we got five games this week; that could be a blessing or a curse.”

Price said the loss was disappointing; adding that he thinks the team is better than NR.

Price said in order for the team to do better, then the coaches have to coach better.

“I’m going to have a talk with them (Monday) because I’ve felt in the past couple of games, that it’s been on me,” he said. “I did a poor job of coaching. I got caught up in the moment. I started changing the way I coach. I was harder on them.

“The one thing I’ve got to remember as a coach is that they are still kids,” he said. “I was, personally, taking the fun out of it.”

Price said in the end, he hopes the five games this week will benefit the team.

“We’re going to give it our best shot and see what happens,” he said.

Cole Waters went 3-for-3 with one run and an RBI to lead the Cougars. Ryan Johnson went 2-for-3 with a run; H.T. Fountain, Chris Brown, Drew Koons and Kainoa Gumapac had one hit each.

The Cougars went ahead 1-0 after the first inning, and tacked on one run each in the third and fourth. CV scored one run in the third.

Brown struck out five and allowed two runs on four hits in four innings of work.

The Cougars didn’t get a hit against North River’s pitching as the game went five innings.

Waters had a good game on the mound, giving up one run on two hits while striking out nine.