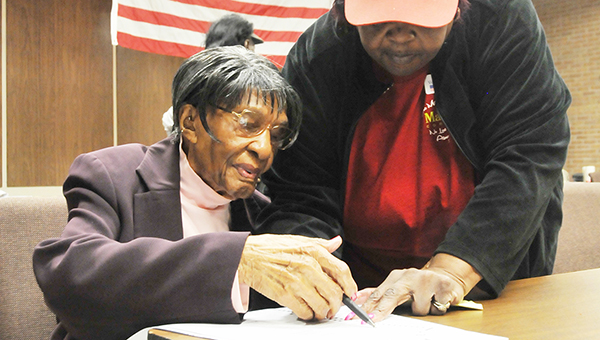 Barnetta Williams (left) votes during the 2016 Primary Election Tuesday. She is being helped by Lillie Johnson. | Andrew Garner/Atmore Advance

At 108 years old, there’s nothing that can stop Atmore resident Barnetta Williams from doing her civic duty.

Williams, of Escambia Point Circle, voted in the 2016 Primary Election on Tuesday at city hall.

She said she started voting in the mid 1960s, when African Americans were allowed to vote through the Voting Rights Act of 1965. The act was signed by President Lyndon Johnson.

When asked who she’s going to vote for, Williams smiled and said it was a personal choice.