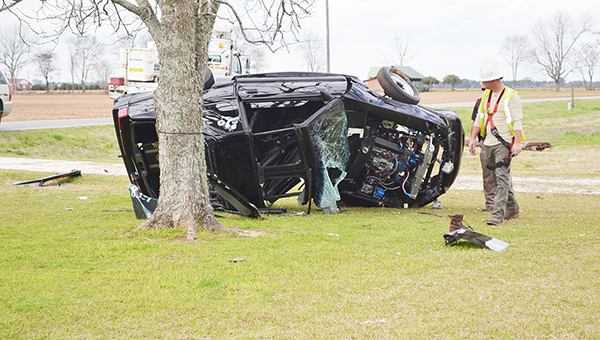 An Atmore man was killed when his car ran off the road off of Pouncey Road.
Allison Brown/Atmore Advance

An Atmore man was killed in a one-vehicle wreck Tuesday afternoon on Pouncey Road.

David Hudson, 41, of Jack Springs Road, was killed when he lost control of his vehicle due to drag racing, Escambia County Chief Mike Lambert said.

Lambert said the wreck is under investigation with the Alabama State Troopers and the ECSO.

According to Trooper Jamie Maloy, Hudson was driving a 1987 Ford Mustang, left the roadway and struck a utility pole.

Lambert said Hudson was taken by personal vehicle to Atmore Community Hospital, where resuscitating and life-saving measures were performed until he was pronounced dead.

“These people are going to the race track during the weekend and getting all pumped up after seeing the races,” he said. “They come back to the street and are doing crazy street racing. It’s illegal and against the law.”

Lambert said the drag racing is such a nuisance that the public can’t get through on the roads.

“There are spotters on each end of the road with cell phones,” he said. “If they see law enforcement coming, they’ll start to disperse.

“We followed a group around in circles to keep them from running off,” he said.

Lambert said along with the state troopers, the ECSO has patrolled the area to stop the drag racing.

“We’ve issued over 20 citations for the racing,” he said. “We’ve asked these people to not do this and continue to tell them that somebody could get hurt and killed. Last weekend, there was a severe wreck, where somebody lost control and went into a gentleman’s house.

“We were very fortunate that nobody got hurt and killed there,” he said. “We once again continued to ask people not to race on the road, but (Tuesday) it finally happened.”

Troopers continue to investigate the crash.

In an unrelated incident, one was injured Tuesday morning in a two-vehicle wreck at the intersection of 2nd Avenue and Highway 31.