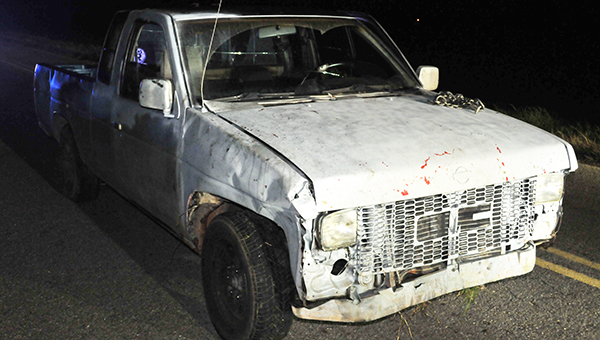 Escambia County sheriff’s deputies pursued a Mississippi man in a high-speed chase that ended with shots fired in a corn field near the Huxford Community earlier tonight.

Chief Deputy Mike Lambert said David Howell, 35, of Lucedale, Miss., took flight after a traffic stop was initiated one of his deputies.

“He took flight in the vehicle afterward (the traffic stop), and took off south on Highway 21 into the Atmore city limits,” Lambert said.

At this point, Lambert said Howell turned around and proceeded north toward the Huxford Community, where he lost control of his vehicle, a Nissan hard body truck.

“He entered the (corn) field and continued to flee,” Lambert said.

The field is located just north of Fountain Correctional Facility.

Lambert said Howell’s vehicle was reported stolen by the Mobile Police Department after a registration check was performed.

Additionally, upon a search of the vehicle, methamphetamine, drug paraphernalia and a weapon were found inside of the truck, Lambert said.

“At this time, he’s been charged with possession of a controlled substance and possession of drug paraphernalia, not including numerous traffic violations,” he said.

Lambert said his deputy noticed Howell stopped by the road near the Holman Correctional Facility main entrance on Highway 21, and stopped a little ahead to wait for the vehicle to drive by.

Lambert said his deputy grew suspicious of Howell because he hid from view as he drove past. Then, the deputy conducted the traffic stop, which initiated the chase.

Lambert said in order to stop the vehicle from fleeing, shots were fired to disable the vehicle. No one was struck by the gun fire.

The investigation is ongoing, and further charges are pending, Lambert said.