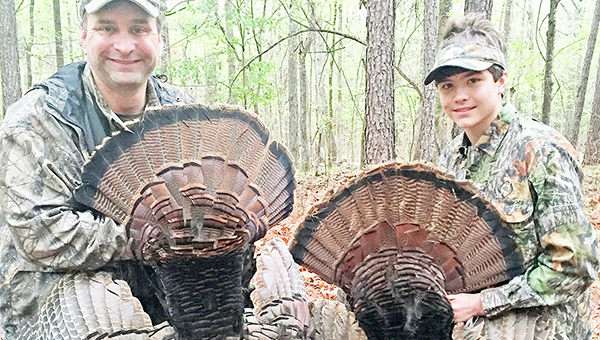 Chuck Sykes, Director of the Alabama Wildlife and Freshwater Fisheries Division, had plenty of luck with his youth hunters during last year’s turkey season. Sykes and Johnny Adams managed to bag a double on a hunt in Macon County. | David Rainer photo

If the weather forecast is anywhere close to accurate, the start of the 2016 turkey season may be déjà vu all over again. Last year, weather was not the turkey hunter’s friend, especially those who were limited to hunting on weekends.

With the special youth turkey-hunting weekend on the horizon, it looks like rainy weather will affect how hunters will approach the opener.

Chuck Sykes, director of the Alabama Wildlife and Freshwater Fisheries Division, said his scheduled youth hunt will proceed as planned with one notable exception.

“I’m going to be out there in a rain suit Saturday morning with my little fellow,” Sykes said. “There will probably be quite a few others who plan to do the same thing. It’s been pretty this week, so the turkeys are probably getting fired up. The fellow I’m going with is eat-up with turkey hunting. He’s been scouting. If it’s bad weather, we’re going to go anyway and hope for the best. As long as it’s not thundering and lightning, we’ll be there. We’re hoping it will push on through and the kids will have a good day Sunday.”

Sykes said getting youngsters involved in the outdoors is crucial to the future of hunting and conservation.

“We’re trying to do everything we can to get as many youth as we can participating, which is why we have youth dove hunts, special waterfowl seasons, special youth seasons for deer and turkey,” he said. “It’s a way to get the youth out there prior to the general seasons and make them feel special. We’re doing it just for them. The youth seasons used to be one day. The commissioner (N. Gunter Guy Jr.) and the board voted to expand the youth deer and turkey hunts to more than one day. That’s going to be especially helpful this weekend.”

The regular turkey season opened on March 15 in the majority of state (visit www.outdooralabama.com for seasons and bag limits) and Sykes fears a weather pattern similar to 2015 could be developing.

“Last year, on Tuesday, Wednesday and Thursday, the weather would be good,” he said. “The bad weather would start moving in on Friday, rain Saturday and Sunday and move out on Monday. That kills the weekend warriors, like myself now.

“I’m looking at the 10-day forecast, and it doesn’t bode well for folks who can just hunt on weekends,” he said. “Last year we got into that pattern, and I think it rained just about every weekend. Turkeys are harder to kill if they don’t gobble. Typically, they’re not going to gobble in inclement weather.”

Should the weather pattern turn in the hunters’ favor, Sykes said there is a significant upside to last year’s foul-weather woes.

“I think if we have some good conditions, we could have a banner season,” he said. “I believe a bunch of gobblers made it through last season that normally hunters would have killed, simply because the birds didn’t gobble last year.

“When I used to guide and had plenty of time to hunt, it didn’t matter if a turkey gobbled or not,” he said. “I stayed in the woods and knew what they were doing. I could figure out how to kill one. With the time constraints I have now, I don’t have time to scout and stay in the woods from daylight to dark and figure turkeys out. So I’m behind the eight ball when we have bad weather on the weekends. If they don’t gobble, it’s harder for me to deal with them. I think a lot of people are like that.”

“Indications from my personal observations and people I’ve talked to is that we had a strong late hatch last year,” Sykes said. “So I’m expecting to see jakes and young hens out there this year. But, with turkeys, it’s all site specific. We may have one district where the hatch was good and one district where the hatch was bad. It all depends on weather conditions during that crucial time of the year.

“I know properties where the owners properly thinned their timber and burned and were serious about predator control,” he said. “They’ve got turkeys running everywhere. Then there are properties that don’t have as many turkeys as they used to. Turkeys are a lot more sensitive to the elements and habitat conditions than deer. It can go from boom to bust in a short amount of time.”

Sykes said that’s what happened with the quail hunting in Texas, which had suffered through record drought for several years. The quail population plummeted during that time period.

“Texas got rain this past year, and it was like quail were falling from the sky with each raindrop,” he said. “Ground-nesting birds are dependent on the right conditions to be successful. Turkey poults need cover, not too much rain and good bugging areas. You’ve got to have insects.”

The second Alabama Conservation Advisory Board meeting of 2016 is scheduled for the Pelham Civic Complex on March 26. Although rumors to the contrary were spreading like wildfire, Sykes said Wildlife and Freshwater Fisheries will not recommend any changes in the turkey seasons and bag limits at this time.

“We are in the middle of a five-year study with Auburn University, and we will wait until we have definitive data to justify any changes to the seasons and bag limit,” Sykes said. “Auburn is currently catching turkeys and attaching GPS transmitters. The researchers will follow the turkeys through nesting, brood-rearing and mortality. It’s going to give us a lot of information that we’re lacking right now.

“But we still need people to go to the website (outdooralabama.com) and sign up for the Avid Turkey Hunter Survey. The more people we have doing it, the better data we get from the different parts of the state.”