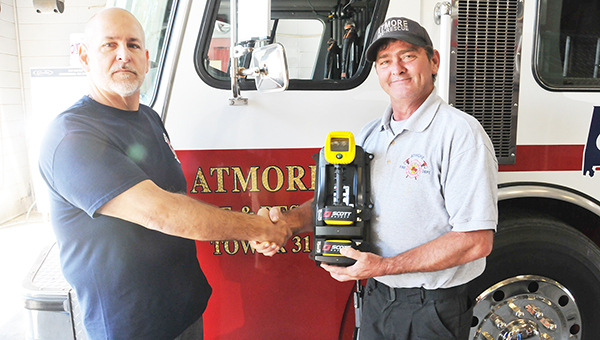 Firefighters Support Services Inc. (FSS), a 501 (c) (3) charity based out of Michigan, donated a new thermal imaging camera (TIC) to the department.

John Carre, president of FSS, said the TIC allows firefighters to see hot spots in walls, detect heat sources in smoke-filled rooms and gives the attack source on a fire before it gets out of hand, among other uses.

“There are multiple uses for it,” Carre said.

Atmore Fire Chief Ronald Peebles said the department got lucky because the FSS donates to few departments each year.

“We got the luck of the draw,” Peebles said.

Peebles said the AFD has two TICs already, but a newer camera was badly needed.

Fortunately for Peebles, the FSS specializes in thermal imaging equipment.

“Typically, depending on how much revenue we take in from each state, it varies on how often we go to that state to give donations,” he said. “We like to give back where we receive the funds from. New York is a huge state; California and Texas, and Florida is a huge one.

“Alabama, they’re in the middle,” he said. “We might come here every two or three years. We might come next year; we want to be fair about giving funds.”

Carre said the FSS employs a telemarketing fundraiser to acquire the funds to make donations.

Carre said the reason why he chose Atmore was because the city was near the top of his call list.

“We prefer that we’re contacted, but a lot of fire departments aren’t aware of us,” he said. “I got a hold of chief (Peebles) and by then, I had made a commitment to Anniston. I felt a little bit bad because (Peebles) told me how much they needed this.”