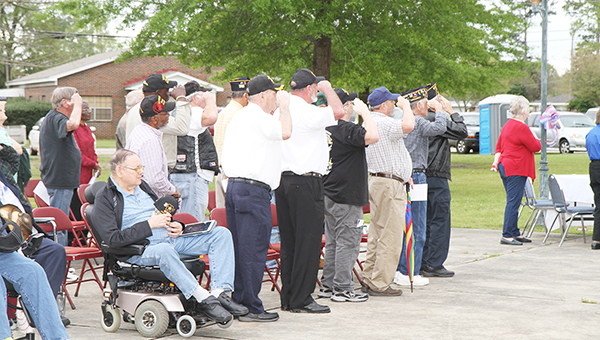 Good crowds turned out for the Welcome Home Vietnam Veterans ceremonies on Saturday.

The ceremony sponsored by the Atmore Memorial VFW Auxiliary was held at Heritage Park; and another was held at VFW Post 7016.

The auxiliary’s event was partially funded by a VFW Foundation Community Services grant.

Even though the weather wasn’t desirable, the event at the VFW Post drew a big crowd, Commander Billy Gates said.

Gates said he estimated that around 200 guests were served and visited the post.

Hanks said of the 2,709,918 Americans who served in Vietnam, less than 850,000 are estimated to be alive today with the youngest American Vietnam veteran’s age approximated to be 54 years old.

The crime rate among veterans is low, he said.

Vietnam veterans are less likely to be in prison, as one-half of 1 percent have been jailed for crimes.

There are 2,338 missing veterans in action, Hanks said. Seven-hundred-and-sixty-six prisoners of wars were counted and 114 died in captivity.

Hanks talked about the current conflict in Iraq and Afghanistan.

“Today in Iraq and Afghanistan, the same mistakes are being made,” he said. “News media and politics are busy trying to tear down everything accomplished by the U.S. service members.

“During the Vietnam War, the question was asked ‘what if they have a war and nobody comes?’ If Washington (D.C.) continues the way they have for these past three wars, we may find out the answer.”