A Jackson man is being held in connection with the Friday murder of an Atmore resident. 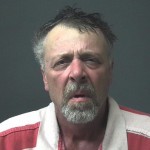 “Witnesses said the two argued and that Mr. Rager was the one who shot Mr. Mothershed,” Lambert said.

Rager is charged with one open count of murder and transported to the Escambia County Detention Center.

Mothershed, who was pronounced dead at the scene by emergency personnel, was transported to the state department of forensic science for an autopsy.

The case is still under investigation and information is being presented to the Escambia County District Attorney’s Office for prosecution, Lambert said.