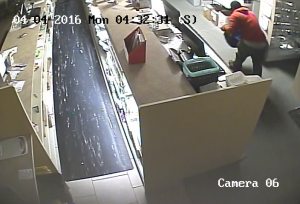 Shown is one of the burglars in the Buy-Rite Pharmacy. | Submitted photo

The Atmore Police is looking for information on two males who were videotaped stealing controlled substances from the Buy-Rite Pharmacy on Monday.

According to Chief Chuck Brooks, the police department responded to an alarm at the pharmacy at 4:28 a.m.

“Patrol officers arrived approximately four minutes later to find that the front door had been pried open as well as the security bars,” Brooks said in a press release. “According to surveillance video, what appeared to be two males in hooded jackets, masks and gloves entered the pharmacy, placed several controlled substance items in a trash bag and exited the store in less than a minute.

“The burglars’ description and method of operation closely matches other recent burglaries in Robertsdale, Wetumpka and Escambia County, Fla.”

Brooks said anyone with information relating to the burglary, or any of the other pharmacy burglaries, are asked to contact the APD at 251-368-9141 or any law enforcement agency in your area. 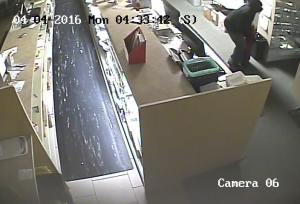 Shown is the other burglary suspect in the Buy-Rite Pharmacy burglary. | Submitted photo