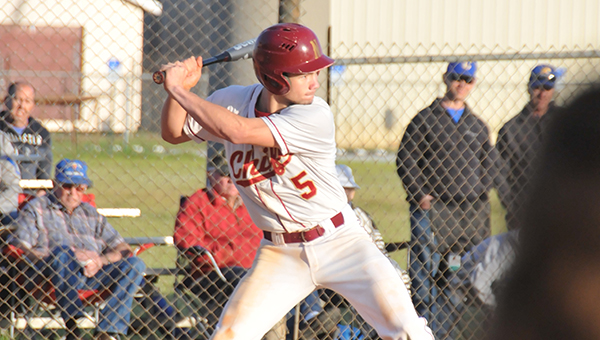 Northview’s Roman Manning hit a walk-off single in the bottom of the eighth to help lead the Chiefs to a 6-5 victory over Chipley tonight. | Andrew Garner/Atmore Advance

Northview’s seniors pulled together and came through with an extra-inning 6-5 district victory over Chipley, Fla. earlier tonight at home.

The Chiefs lead by two going into the seventh inning, but CHS tied the game to force extras.

In the clutch, senior Roman Manning dialed up a hard hit to first base that scored the game-winning run for a walk off in the bottom of the eighth inning.

“Clutch hit by Roman Manning,” NHS coach Sid Wheatley said. “He drove it the other way in the hole there. That’s what I told him there. I tried to relax him.”

The Chiefs had runners on first and third with two outs when Manning made the hit.

“It’s senior night,” Wheatley said. “I’ve got a senior at the plate, and sure enough he pulled through.”

Thomas Moore, a senior, had a stellar night on the mound even though he didn’t get the win. Moore struck out 10 batters and allowed five runs in seven complete innings.

Wheatley said Moore threw his best game of the season tonight, and that was the reason why he kept him in the game in the seventh.

“I knew his pitch count was getting high, and as a former pitcher, I want to protect their arm,” he said. “I really thought he was going to go out there and get those last three outs and get it done. Of course, we had a mistake or two that kind of helped them.”

Daniel Mascaro came in to pitch the eighth and allowed no runs on no hits to earn the win on the mound.

Quentin Sampson went 2-for-5 to lead NHS. Alston Wiggins, Seth Killam, Zach Payne and Moore had one hit each.

In earlier action during the game, the Chiefs strutted out to a 4-0 lead after the first inning. CHS cut the lead to 4-2 in the fourth.

With the win, the Chiefs (7-9) are in a tie for third place, but will get the fourth seed because of the tiebreaker in FHSAA Class 1A, District 3 play.

The Chiefs will end their regular season on Tuesday on the road at Laurel Hill.