Alton and Annie Bailey Byrd. She was a member of Calvary Baptist Church.

She is preceded in death by her husband, C.E.Walker; son, Sylvester Chavers; daughter, Dorothy Joiner; and grandsons, Lee Graves and Tony Joiner.

A special thanks goes to the Atmore Nursing Home for their special care given Mrs. Walker.

She was a Homemaker, born in Pineville, Fla., on June 29, 1936, to the late Arthur Lee and Eula Seales Barlow.

She is preceded in death by her husband, Johnny McCullough.

Mrs. Dove was a native of Jacksonville, Fla. and a resident of Davisville since 1971. She attended the Pinebarren Baptist Church.

She is preceded in death by her parents, Lee A. and Mary L. Walker.

Funeral services were Tues., May 3, 2016, at the Petty-Eastside Chapel Funeral Home with the Rev. Mike Harper serving as officiate.

Burial was held at the Pinebarren Cemetery.

Visitation was held May 2, 2016, at the Petty-Eastside Chapel Funeral Home.

Petty-Eastside Chapel Funeral Homes LLC of Atmore was in charge of all arrangements.

A native of Atmore, Kenny was a graduate of Escambia County High School in 1982 and had attended Troy State University on a football scholarship. He was a lifelong member of Gaines Chapel AME Church. He loved his family, fishing, and Auburn football. He was a retired chauffeur with Gold Kist Chicken Company in Georgia.

He was preceded in death by his parents, Mr. Johnnie Lyons and Ms. Josie Mae Jefferson Lyons; and one sister, Sandra Lyons Poindexter.

Mr. Russell D. Barrette, 88, of Atmore, passed away on Fri., April 29, 2016, at his son’s home in Alvin, Texas. Russell was born on Dec. 7, 1927, and was residing with his son in Alvin for the last five years. He worked in the oil field industry and had a variety of skills and jobs pertaining to drilling. 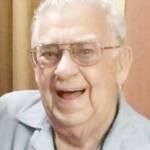 Russell was preceded in death by his wife, Buford Griffin Barrette; and daughter in law, Connie Barrette.