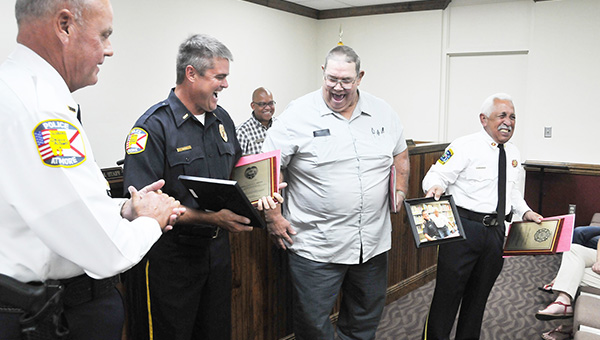 Those who remember Don Whatley remember a gentle giant who had a heart for public service.

Whatley, the long time superintendent of the street department in Atmore, died last week at the age of 66.

Whatley worked for the city of Atmore for 31 years, working his way up the ladder.

Former Atmore Mayor Howard Shell said he visited Whatley a couple weeks ago and thought he was on the road to recovery.

“Don was truly a gentle giant in every sense of the word and a devoted public servant,” Shell said. “During the years of his service, he spent many nights sleeping on the floor in his office during the hurricanes and any other emergency we might be having.”

Whatley retired from the city in July 2015.

Whatley’s replacement as superintendent, Calvin Grace, said his former boss was like a father to him.

“I worked for him for 28 years,” Grace said. “He was a great boss and loved all of us. He treated all of us like we were his children. He was just a great boss.”

Grace said Whatley could fix everything.

“If he couldn’t fix it, he sure could tell you how to do it,” Grace said. “He had knowledge of it.”

“He could look at a project and go do it,” Staff said. “He could operate any machine we had.”

More than anything, Staff said Whatley was a giving man.

“He would love to go out at this time of year, catch a bunch of bream and feed everybody,” he said. “He was a fantastic employee and very loyal.”

Shell said a fond memory of Whatley was when he came into his office to give his life to the Lord.

“Don sure felt better for doing it,” Shell said. “We always had prayer at our council meetings and Don gave most of them, and you could always tell they came from his heart.

“He was a man everyone respected because he earned it with his easy-going ways,” he said. “I told people that Don Whatley could take a pair of pliers and a piece of bailing wire and fix most anything. Don was not only a city employee, he was my friend and I will miss him.”