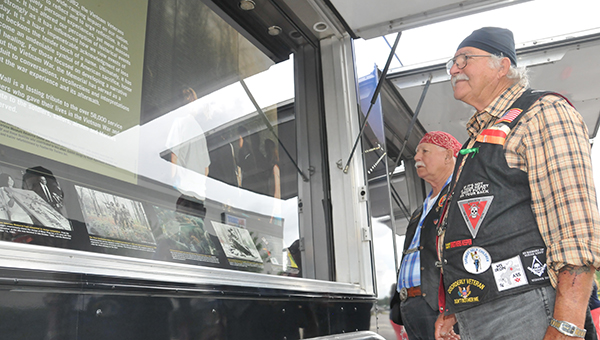 David Post tried to get the right shot with his cell phone.

Post, a U.S. Army veteran, was at the Travel Creek Plaza on Tuesday morning, where a group of Patriot Guard Riders was to meet and escort a half-sized replica of Vietnam Veterans Memorial to the U.S.S. Battleship Memorial Park in Mobile.

Post said the memorial, which is called “The Wall that Heals,” is comforting.

“I lost family in Vietnam,” he said. “I had two cousins that came back with (post traumatic stress disorder) before they knew what it was.”

The memorial, which spans 125 feet and is 5-feet tall, will be on display at the battleship park from Thursday until Monday morning. The Vietnam Veterans Memorial Fund pays for the exhibit.

“This is what we call the knowledge center,” Bud Smith, veteran and truck driver said.

Smith drives the half-sized memorial on a tour, which makes around 36 stops a year all over the country.

Law enforcement and veteran bikers escort the memorial to its next destination.

The Atmore Police Department, along with the Patriot Guard, escorted the memorial from the Travel Creek Plaza to exit 57 on Interstate 65, where the Baldwin County Sheriff’s Office took over. The riders used the plaza as a rallying point.

Pursley said the riders call it a “HOTH” mission. HOTH stands for Help on the Home Front.

“We make sure that Vietnam Veterans who haven’t had the chance to see the actual wall in Washington, D.C., get a chance to see it,” he said.

The Patriot Guard Riders were formed in 2006 to protect families during funerals for their loved ones.

The exhibit will be open 24 hours a day.

Post said he’s glad to be able to see the memorial.

“I’ve wanted to go see the actual wall, but I haven’t been able to get up there,” he said.