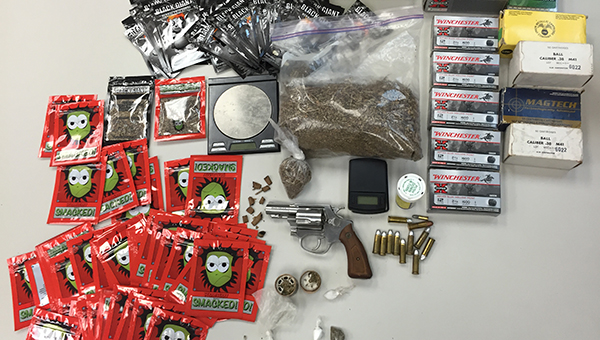 Still in jail under $1M bond

After a several-week investigation, police narcotics investigators arrested an Atmore man for drug and gun possession, and attempting to flee charges earlier this month.

According to the Atmore Police Department, Jabarie Arnold, 37, of Atmore, has been charged with possession of marijuana I, three counts of possession of a controlled substance, possession of drug paraphernalia, altering a firearm’s identification and resisting arrest.

In addition, there was a pistol located with its serial numbers filed off, Brooks said.

“The violator was not present at the residence during the search,” he said.

Brooks said investigators later signed felony arrest warrants for Arnold, who was apprehended on May 10, and taken into custody by officers with the APD with assistance by the U.S. Marshals.

“Arnold attempted to flee from officers and once apprehended, was found to have drug paraphernalia in his possession,” he said.

Arnold was transported without incident to the Escambia County Detention Center in Brewton, where he is still in jail under a $1,000,000 bond.