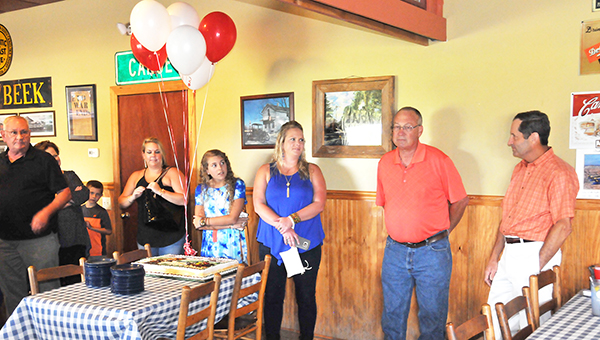 After a more-than 37-year career with Swift Supply Inc., the Atmore resident is retiring from the business he loves.

“When David (Swift) hired me, I didn’t know anything about lumber,” Mims said. “I worked out here for a month to a month and a half in a lumber shed. Then, I went to work at a store in Jay (Fla.) for two weeks.”

Mims said he then left the Jay store and ran a store as a manager in Monroeville for four years. While there, Mims helped sell lumber, plywood and insulation.

“We didn’t have hardware much,” he said.

Mims found his way back to Atmore after his stint in Monroeville, and he’s worked here ever since.

Looking back, he said the lumber company was busy.

“We didn’t have a computer,” he said. “We did everything by hand. It was just two of us. We worked like that for 10 years. David had been doing most of the buying and getting more involved with most of the other things.

“Then, he brought me into starting to do all of the purchasing all over the company,” he said.

Mims said he enjoyed handling the purchasing aspect of the business, especially when it involved interacting with customers.

“I’m going to miss that part of it,” he said. “I’m going to miss getting up every morning, putting my shoes on and pants on, and sitting behind this desk and talking with different (representatives) from companies.

“I won’t miss the inventory,” he quipped.

With everything going so well for Mims, he got some bad news a few years ago after being diagnosed with mantle cell lymphoma, a form of non-hodgkin lymphoma.

Because the cancer is deadly, doctors gave Mims three to five years left.

He’s going through chemotherapy every day, and his doctors told him he has between eight and 10 years. This latest cancer battle isn’t his first. Mims fought testicular cancer in 2000.

Mims said it’s because of his cancer that he decided to retire.

“I’m going to start fishing and traveling,” he said. “I’ve got enough to keep me busy. I’ve got three-and-a-half acres, and two houses to keep up.”

Mims said he gained some special memories while working at Swift Supply.

“I used to go to what they called horse and pony shows with the Pink Panther, Smokey and the Bear and we invited the kids over,” he said. “We had animals from Gulf Shores here, we went to Orange Beach, and had a Bengal tiger. We had vendors come in.

“We just had a ball,” he said. “We’d take pictures with the kids. It was geared toward children to get the young parents in the stores.”

Mims said the biggest change he’s seen in the business has been the technology.

“The biggest change is the way we do retail sales,” he said. “When I first started, there was a couple computers in the back. Everything was done by hand. Everything was sent to Atmore. Now, everything is done by point of sale and credit card machines.”

He said he’s going to take a week and go to St. Augustine, Fla., with his wife, Darla “Totsie.”

“My wife and I are going to St. Augustine and to spend a few days playing around,” Mims said. “Then, we’re going to take off and do a little traveling. We’re going to try traveling as much as we can as the good Lord allows me.”

Land is being cleared for Popeyes restaurant to be built on Highway 21, near the interstate. The new Louisiana Kitchen... read more