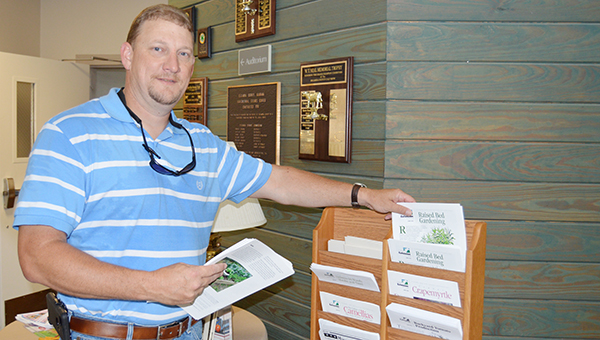 There is now a new face at the Escambia County Extension Office.

Anthony Wiggins has been named as the new county extension coordinator for Escambia County. Ken Kelly, the longtime coordinator, has been promoted within the agency.

Wiggins, who has worked for the Alabama Cooperative Extension System, for the last 16 years, comes from Monroe County. There, he covered eight counties as the regional extension agent in animal science and forage.

Now, he plans to concentrate his efforts on a single county.

“Before, it was answering a lot of phone calls about crop and animal health and doing programs for the public,” Wiggins said. “Now, I’m really excited to really get back to focusing on Escambia County and the great programs already established here.”

A graduate of J.U. Blacksher and later Auburn University where he earned a bachelor’s degree in animal science and later a master’s degree in education, Wiggins spent a year in the classroom and another three on the family farm before going to work for the extension system.

“We have a family farm in Goodway, and as we know, farming is a hard business,” he said. “Hurricanes and drought made me look for another option, and when the position came open in 2000, I decided to go that route.”

Since then, he hasn’t looked back, he said.

The Alabama Cooperative Extension System operates as the primary outreach organization for the land-grant functions of Alabama A&M and Auburn Universities. Agents in all 67 county offices offer educational programs adapted to the needs and interests of local residents. Regional agents work in teams across county lines to provide specialized knowledge in a wide range of subjects.

Wiggins said recent success with local programs such as the “Chick Chain,” “Pig Squeal” and calf shows are areas of which he hopes to build on.

“Working with people, helping people makes me love my job,” Wiggins said. “Those programs have really grown over the years. We have a strong 4-H program, and we want to see that continued success.”

There will be a meet and greet on Tues., July 12, at 3:30 p.m. at the extension office on Ag Science Drive, near Southern Pine for those wishing to meet Wiggins.

To combat the summer heat, Durrell Martin and the rest of the crew at Hawkeye Lawn Care stay hydrated by... read more