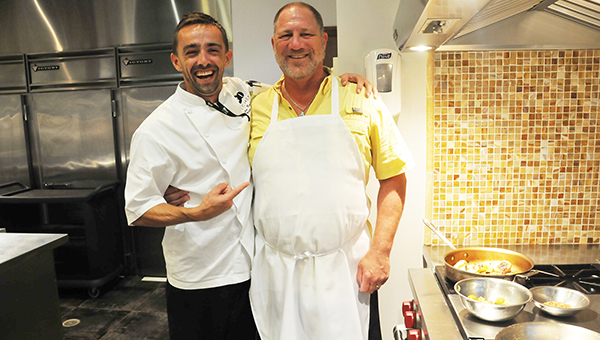 Room Chef Charlie Creelman moves easily from one cooking station to another giving cooking advice to visitors during a recent Cooking Studio session at Wind Creek Atmore, and he’s in his element.

Creelman was recently promoted as the head of the cooking studio and the pool bar.

The cooking studio provides guests the opportunity to have a hands on experience creating and cooking their own meals. Creelman also cooks during the studio’s table experience.

“You can’t focus on one station,” Creelman said. “Everyone wants their own personalized experience, so I feel like I’m obligated to get to each station and at least try to do one thing, and show them one thing. I try to get to each person and talk to them, and it’s all very genuine.

“I’m genuinely interested in what they think about things,” he added. “Even if they don’t like it, I’d like to know. That kind of constructive criticism turns me into a better teacher.”

Creelman, an East Detroit, Mich., native, has been at Wind Creek Atmore for more than two years.

Prior to coming to Atmore, Creelman worked as a chef on the PGA Tour at TPC Sawgrass in Ponte Verde Beach, Fla., for six years and eight golf tournaments.

“It was a riot,” he said of his experience on the PGA Tour. “You get to meet all of the pro golfers. It was fun to socialize with them. I got to meet Tiger (Woods).”

Creelman recalled a story in which Woods spoke to his friend’s mom on the phone during a Mother’s Day tournament.

“He talked to her for 15-20 minutes,” Creelman said about Woods.

Creelman cooked just about everything while with the PGA, but landed in a pastry job.

“I was good at pastry, but I wasn’t that good,” he said. “I had two weeks with a great Philippine guy, Butch. He trained me for a week and a half. Trying to understand him alone was very tough. That gave me a great base. He taught me how to do amazing bread.”

Creelman added that he could quit doing the kitchen business and open up a bakery, cooking baguettes and bread alone.

After some training in baking bread, Creelman said he was allowed his own budget to get cooking utensils and other supplies. He used his time after work to hone his skills in pastry and other culinary areas.

“Over the course of four to five years, I got really good at it,” he said. “I fine tuned it. I got into the gastronomy thing. It really kind of developed me as a whole.”

After dropping out of high school in tenth grade and getting his associate’s degree in culinary arts, Creelman worked many different jobs as a carpenter, plumber, roofer, etc.

He moved to Florida at 22 and went to Le Cordon Bleu, one of the most well-known culinary schools worldwide.

While he’s been the room chef at Wind Creek, Creelman said it’s been tough, but also rewarding.

“This has been my hardest role to fill,” he said. “The teaching has come naturally to me. Here it’s been not only working with computers; I never really had to make a schedule (at TPC Sawgrass). It’s my most challenging role I’ve ever walked into.”

For Tallahassee, Fla. residents James and Karen Blackburn, getting to learn from Creelman at the cooking studio has been great.

“Charlie is a great teacher,” James said. “He wants you to enjoy and experience cooking, and cooking differently.”

James said he and his wife have been coming to the cooking studio for the past three weeks, but has been taking the hands on class since December 2015.

Karen said Creelman is good at bringing a group of strangers together.

“He can take a group of people, and he can bring them together,” Karen said. “It’s his personality. He loves what he does.”

In the end, Creelman said it’s all about those attending the cooking studio getting out of it what they put in.

“I just really enjoy it,” he said. “I really enjoy walking the property and talking to regulars. Regulars, I absolutely love, and I’m so interested in them. I’ve had people say this has saved my marriage.

“As far as a rewarding job, this is it,” he said. “To see people create their meal and cook it when they don’t think they can, and to see the smile on their face and the cleared plates — that’s all that matters.”

Creelman lives in Cantonment, Fla., with his girlfriend, Destiny.

One Atmore resident was injured during a three-vehicle wreck that occurred last Friday at the intersection of North Canoe Road... read more