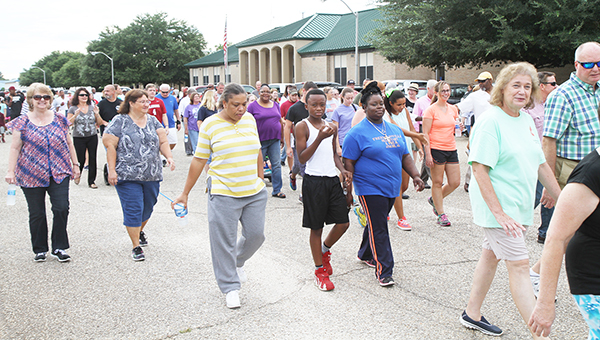 Above: Participants walk in front of Atmore City Hall Sunday at the start of the Love Walk. Below: Atmore Police Officers Jesse Traweek and Thaihee Staples give a thumbs up during the walk. | Photos by Walt Butler, Andrew Garner/Atmore Advance

A large group of residents from Atmore and the surrounding area walked for first responders in a Love Walk from city hall to Heritage Park on Sunday afternoon.

“Rather than react, I think we as members of the community should show some love for law enforcement officers, and we aught to pro-act,” the Rev. Harold Askew, of New Pleasant Hill Missionary Baptist Church, said to a crowd of some 200 walkers. “Don’t wait until a tragedy occurs in our community. Let’s get a handle on it before it happens.”

Residents walked from city hall, down Presley Street, turned right on Craig Street and finished at Heritage Park, where a rally was held.

During the walk, people carried signs and made sure to thank police officers along the way.

The walk was held in large part due to the recent shootings in Baton Rouge, La. (2), St. Paul, Minn. and Dallas, Texas. In the last couple of weeks, eight police officers have been killed from shootings after two black men were shot and killed by law enforcement. Thirty-one police officers have been killed this year, according to the Officer Down Memorial Page’s website.

“This is about love,” Askew said. “This is our way of showing we love each other and support our policeman.”

APD Police Officer Jesse Traweek, who participated in the walk, said the event helps a lot by bringing every one together, adding that Atmore’s been lucky that nothing serious has happened here.

“We’re going to help keep it that way,” Traweek said.

Atmore resident Cielita Moye said the walk filled her with much pride. 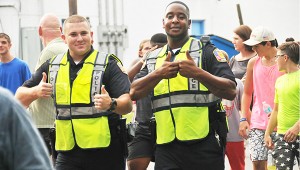 “It meant a whole lot to me,” Moye said. “It means that I walked and helped the community with the peace.

“It meant a lot to our officers,” she said.

Brooks began his speech with the first sentence of a code police officers recite at the academy.

“’As a law enforcement officer, my fundamental duty is to serve mankind,’” he said. “We served mankind.”

Brooks emphasized that the police department doesn’t serve one group of people only.

“I take it as an extreme honor to be your police chief,” he said. “I’m proud of the men and women who serve and wear the badge every day.”

Brooks reminded those listening that police officers run to danger, not from it.

The Rev. Willie Hawthorne encouraged the community to ask itself “what can I do?”

“Know what you can do, and make it better,” Hawthorne said.

Dr. Coleman Wallace also reiterated the question of what can everybody do for others, and to not be afraid.

Dr. Debora Bishop of First United Methodist Church of Atmore, said children are looking up to everyone and are seeing good things as a result of the walk.

“This is the beginning step,” Bishop said. “Children can see God in our actions today.”

Askew said although he was pleased with the turnout, he wanted to see more young kids in the walk.

“I was pleased because we’ve never done this before,” Askew said. “For the first time, I thought it was an awesome turnout. Hopefully, like I say, this won’t be the end of it. That this will be the beginning and we’ll go from here. Hopefully, the next time we come together, it’ll be bigger and it’ll be better.”