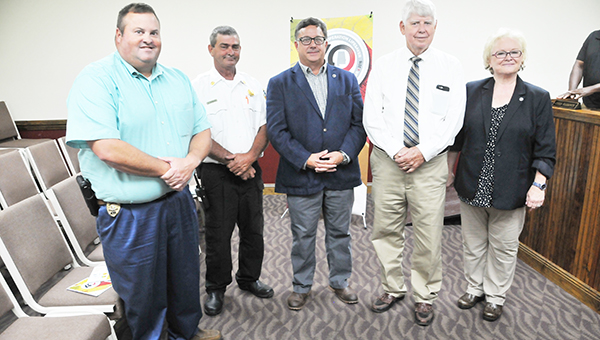 “Every time you see tracks, we want you to think trains.”

That’s the message Nancy Hudson is sending out as a part of Alabama Operation Lifesaver’s (ALOL) 40th anniversary, 40-city tour to help educate communities across the state on safety around railroad tracks and trains.

Hudson and ALOL visited Atmore Monday, and met with different groups to talk about railroad safety.

During the city council meeting, Hudson thanked city officials, including Mayor Jim Staff, the city council and Executive Assistant Celia Lambert for allowing the organization to come to Atmore.

“We had a really good turnout at the presentations,” she said. “We just want to make Operation Lifesaver available to the city, church groups, civic groups and the law enforcement community. We’d love to come in and talk about Operation Lifesaver and remind people to be safe around railroad crossings.”

Atmore is one of 40 communities in the state that has railroad crossings.

The main goal of the tour is to help bring the railroad crossing incidents down to zero.

“We believe if we can save one life, it’s worth all of the effort we do,” Hudson said. “We wanted to remind people anytime they see tracks, we want them to think trains. It’s easy.”

In the United States, crossing incidents claim more than 250 lives each year, and more than 470 deaths on an annual basis due to railroad track trespassing.

ALOL conducted meetings with various groups, including law enforcement, the elderly and other city officials on different safety techniques for each.

During the law enforcement meeting, ALOL taught those who attended about how to respond to a railroad crossing incident in a safe manner, Hudson said.

“We know that it’s easy to get caught up in a daily routine and you’re busy,” Hudson said. “We don’t want anybody to let their guard down.”

A dozen kids at the Atmore Area YMCA sat mesmerized on a recent Thursday as they listened to Alabama Power... read more