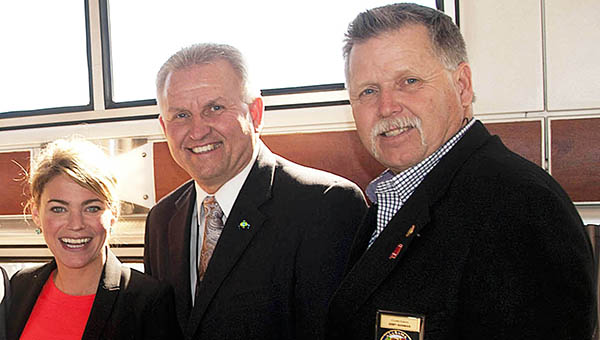 Gehman, a train enthusiast, was recommended to fill the vacancy by state Rep. Alan Baker.

“I knew immediately there was no doubt in my mind who I was going to advocate for,” Baker said. “Jerry has long had a passion for the railroad industry and for trains, particularly in trying to resurrect passenger rail service through south Alabama, in particular through the city of Atmore.”

Gehman will serve on the SRC for the remainder of Bentley’s term in office.

The SRC is comprised of three states — Alabama, Louisiana and Mississippi — and the commission acts as a source for its effort to return passenger rail to the Gulf Coast. At present, Florida isn’t a part of the SRC, but there are efforts to make this happen, which will make it easier for the service to return, Gehman said.

In February, an Amtrak inspection train made stops from Pensacola, Fla. to Jacksonville, to examine the existing CSC railroad infrastructure, and to better understand the rail’s economic, cultural and mobility opportunities, according to Atmore Advance archives.

The SRC is also working with a working group to help return the passenger service, Gehman said.

If passenger service is restored in Atmore, then there will be a daily train that will run from New Orleans to Atmore, and then back to New Orleans.

“That’s part of the Gulf Coast restoration of rail service,” Gehman said. “We haven’t had that since 1963 when Flomaton was a main hub.”

Additionally, the return of a long service train from Chicago, Ill. to Orlando, Fla., is also in the effort, Gehman said.

When asked whether he thinks the passenger service will return to Atmore, Gehman said it all depends on what Congress decides.

“Congress can do things we don’t necessarily know about,” he said. “We do have to continue to pursue state funding. That is an integral part.”

“They don’t make money,” he said. “They’re simply there to aid industry to give us transportation. We asked for the same consideration in passenger service.”

On the effort, Gehman said he spoke with representatives from Alabama in Washington, D.C., about the return of the passenger service, and Rep. Bradley Byrne is on board.

“Ours is not a very expensive model,” Gehman said. “A daily from Atmore to New Orleans is $5 million, annually, originated from the states (that participate in the SRC). The cost would be shared among the states to get the train service.

“We’ve got to come up with the revenue,” he said. “That’s why we like Louisiana and Mississippi to partner with us.”

Gehman said soon, the SRC will find out what the total cost would be to return the service to the Gulf Coast, and hopes to utilize a meeting on Aug. 11 to get the cost down a bit.

Gehman said he’s on the SRC because he doesn’t mind speaking up.

“We can have conversations,” he said. “The rail service makes sense as a viable means of transportation for those who don’t have that now.”

Gehman said it will take 17 months for the passenger rail service to return.