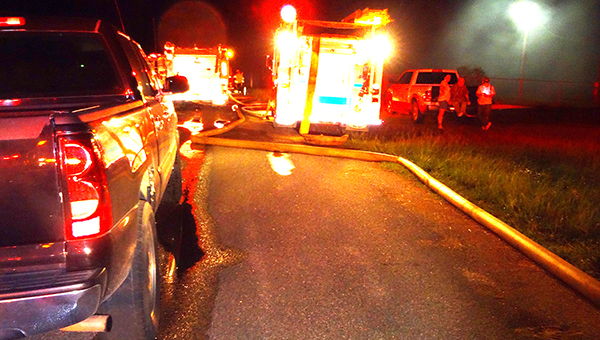 Shown are fire personnel at the fire on Sunset Drive Saturday night. | Peyton snider/
For the
atmore advance

Atmore Fire Chief Ronald Peebles said the department was called out to two structure fires in Walnut Hill, Fla. and on Sunset Drive in Atmore.

Peebles said the AFD was called for mutual aid for the first fire in Walnut Hill at 3:17 a.m.

Peebles said he thinks the fire is being investigated by the state fire marshal in Florida.

On the Sunset Drive fire, Peebles said the house, which was owned by Red Cotton of Cotton’s Furniture, had already been to the roof and partially collapsed.

Peebles said Cotton was awoken by his fire alarm, and after he couldn’t find his cell phone, he walked to the gas station near his home to call 911.

Peebles said the AFD took a defensive approach to the fire.

“Capt. Chris Hughes did a good job of keeping it a defensive attack because the structure was too jeopardized,” he said.

No one was injured as a result of the fire, Peebles said.

Early Monday morning, the AFD responded to an outlet that shorted out.