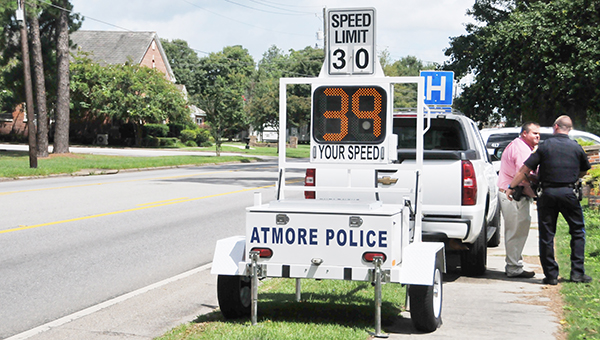 An electronic one, that is.

The Atmore Police Department is cracking down on speeders with a new traffic radar that will move around the city to help eradicate the constant problem with motorists.

Chief Chuck Brooks said he’s been working on getting the traffic radar for years.

“This is our newest tool to combat speeding,” Brooks said as he stood near the intersection of Main and Craig Street on Monday. “My number one goal is to eliminate any accidents at Craig and Main Street. We’ve had entirely too many.

“This is something hopefully that will help us reduce accidents,” he said. “If I can save one life, that’s paid for itself.”

Brooks said the machine costs $10,000 brand new, but the Atmore radar is used, so he got it for way less.

Brooks said the APD was able to acquire the machine through a radar calibration company from Cullman for $2,500.

The radar is hooked to a trailer hitch so it can be moved around town. As motorists travel down the road, the radar shows their speed at which they are traveling, Brooks said.

“Right now (Monday), I’ve got it set at a violation speed over 7 miles per hour,” he said. “My goal once they realize they’re speeding is to get them to slow down.”

The radar sends out a cigar-shaped signal to detect the motorists’ speed going down the road. The bigger the object, the better the radar reads its speed, Brooks said.

Brooks said the traffic radar will move to different spots around the city days at a time.

Brooks said the APD is trying to do everything in its power to keep citizens safe.

Ten representatives from the south Alabama chapter of the American Red Cross have been deployed to aid in the flooding... read more