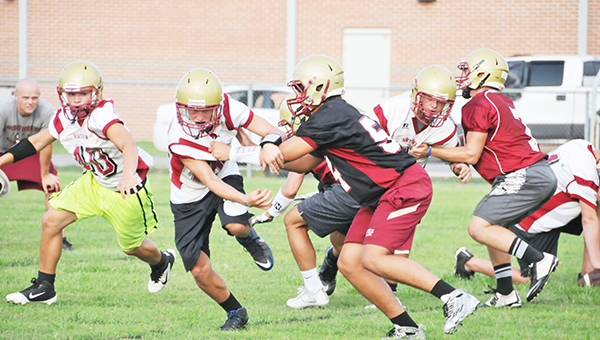 Northview is tired of playing against themselves as the Chiefs travel to play J.U. Blacksher this week in a preseason contest in Uriah. | Andrew garner/atmore advance

Northview is ready for battle.

The Bratt, Fla. school will put on pads and helmet for a preseason game against J.U. Blacksher of Uriah on Friday night.

Chiefs head football coach Derek Marshman said the players are tired of practicing against themselves.

“We’re excited to finally be able to go and compete against another team,” Marshman said. “We’ve been practicing and banging against ourselves.”

Marshman said he’s interested in seeing the development from guys who haven’t done many things in past seasons.

“We’ve been working hard all summer,” he said. “It’ll be a great time to see the workouts pay off.”

JUB won its region last year, and will have all personnel back on the field for its season opener Friday. During the spring game against Escambia County, JUB didn’t have its baseball players on the field playing.

Marshman said JUB is a Wing-T team and will run multiple offenses. On defense, JUB is a 3-3 stack, the coach said.

Kick off Friday night is at 7.