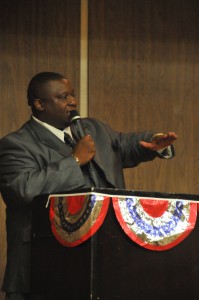 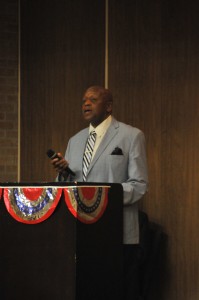 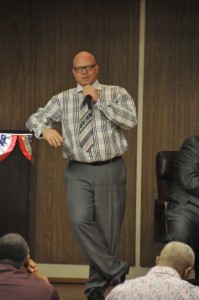 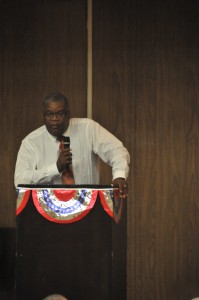 Downtown economic development, Houston Avery Park and the relationship between residents and city services were just a few topics covered during the a political forum for the candidates running for the District 2 seat on Atmore’s city council.

The forum was sponsored by the Atmore Area Chamber of Commerce and the Concerned Citizens of Atmore, and was held at the city hall’s auditorium.

The first question dealt with each candidate’s vision for economic development downtown.

Arnold said his vision is to sell Atmore.

“My vision is to get a look at other small towns, and sell people to like ours,” Arnold said. “If you don’t sell yourself, don’t expect people to come.

“I want to bring people to Atmore, and let them see what Atmore has to offer,” he said.

Jones said in order for the economy to grow, Atmore will have to have a good relationship with its neighbors, including Brewton, Nokomis, etc.

“I think we have to advertise,” Jones said. “We have great schools, a great police department and all of that.

“If we sell ourselves to other communities, we will be asked to bring businesses downtown,” he said.

Jones added that he hopes the city will be able to fill every vacant building in the city.

Robinson said in order to promote businesses in the city, the city will have to do its homework, and improving the city’s streetscape.

“We have so much traffic coming through downtown,” he said. “I’d like to give people something to see, and get them in to the downtown businesses.”

Webster said it isn’t about his vision for the economic development of the city.

“My vision is your vision,” Webster said. “As you city councilman, I am there to work for you.”

The candidates were asked how important Houston Avery Park is to them and why.

Jones said the park’s important to him because he played ball there as a kid, and it still serves a place where children can come and play.

“That was the only place we could go,” he said.

Robinson said he spent a big part of his childhood at the park.

Webster recalled memories of Councilman Cornell Torrence having the coldest drinks in Atmore at the park.

“There are so many kids down there,” he said. “The park holds a lot of good memories for me. I hope it’s going to be important to my children and grandchildren.”

Arnold said the park is important to him because it’s the only place the district has for kids to play.

“I mostly learned a lot about politics there,” Arnold said. “I remember sitting and listening to Coach Torrence.

“It took a village to raise me,” he said, adding that his parents gave all the OK to provide discipline, if necessary. “Houston Avery Park means a lot to me.”

On the relationship between the residents and city services, Robinson said the services are pretty good, but there are still some things to work on, including work for the youth and disabled citizens.

Webster said there’s always room for improvement. He added that all of the law enforcement departments are doing a great job.

Arnold said, if elected, he’ll be a voice for the residents in his district.

Jones said he’ll work to improve education opportunities and some infrastructure problems, including cleaning out ditches and improving roads.

For the final question, each candidate was given a curve-ball type question.

If the city went into a windfall in funds, and each had $500,000 to spend on their district, what would they spend it on?

Webster said he would spend the money on education and establishing a program that helps high schoolers fill out college applications.

In addition, Webster said he would also build a recreation center.

Arnold said he would make improvements to Houston Avery Park, and help the elderly with projects that need completing.

Jones said he would improve the roads, and make sure every street in the district would have a curve so rainwater can run off.

Robinson said he would promote community enrichment activities, improve the streets and build sidewalks with the money.