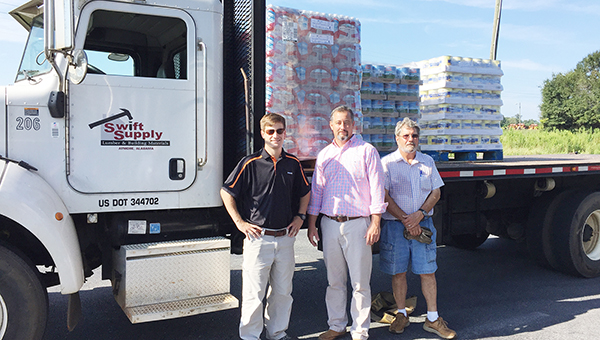 Barbecue professionals John and Kathy Swift are aiming to fill some empty stomachs as the Atmore couple travels to Hammond, La. today to help feed flood victims as a part of Operation BBQ Relief.

Operation BBQ Relief was founded in May 2011 in response to a need for relief efforts in tornado-stricken Joplin, Mo., a community of about 50,000 residents. Volunteers of competition barbecue teams from eight states answered the need to help feed displaced families, police, fire, National Guard and emergency personnel, according to the organization’s website.

Since May of 2011, Operation BBQ Relief has served over 800,000 meals in 19 states. Our funding comes from fundraisers, online merchandise sales and donations. Join #iamOBR a tax deductible monthly contribution where you can select donation options to help support Operation BBQ Relief.

The Swifts, of the barbecue team Wild Bunch Butt Burners, helped coordinate an effort to bring food to Hammond.

One of the people they contacted was Rob Faircloth, owner of David’s Catfish.

“Kathy and John sent out a text looking for donations for food or money,” Faircloth said. “I told them that I could take my food donation farther.”

Faircloth’s major food supplier at David’s is Wood Fruiticher of Birmingham. He said he called Ronnie Jeffcoat and David Wood of the Birmingham food supplier, and told them that he needed 250 cans each of corn and beans. In addition, the company sent over two pallets full of bottled water.

“Having gone through (Hurricane) Ivan, I said, ‘I’ve been there and done this, and I’d be glad to throw in in any way I can’,” Faircloth said. “We know how it was with Ivan. Shoot, some were two weeks without power, and over there in Hammond, some have lost everything.”

The Swifts carried the food and water to Hammond today.