EMA Director: Tropical wave may for into tropical storm 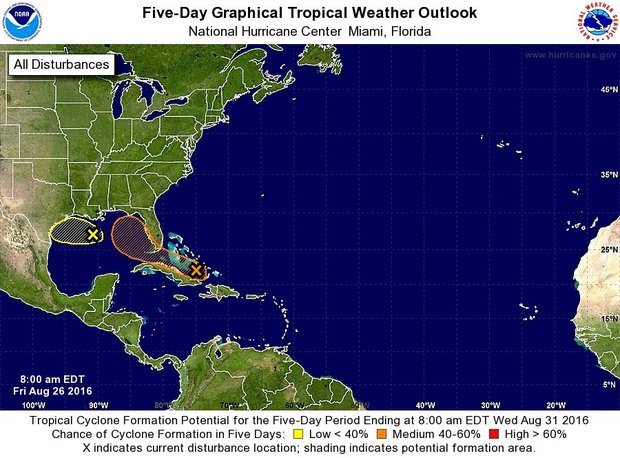 A tropical wave developing in the northeast of Cuba has a good chance of developing into a tropical storm over the next five days, according to Escambia County EMA Director David Adams.

Adams said the wave, 99L, has been too poorly defined to have a good forecast, however.

A tropical wave is an elongated area of low air pressure that moves from east to west across the tropics, causing areas of cloudiness and thunderstorms. West-moving waves, in the case of 99L, can also form in the tropics and may be referred to as easterly waves. These waves are not called tropical waves, as they are a form of inverted trough, sharing many characteristics with full tropical waves.

Adams said 99L was less organized this morning than it was yesterday, adding that if it does get organized, then the NHS will use models to form an educated forecast.

“The wave is forecast to enter the Gulf of Mexico early next week,” he said. “When it enters the Gulf, it will encounter very warm waters and the conditions may be more conducive to strengthening.”

Adams suggested residents use the time to review hurricane plans, be sure to have sufficient non-perishable food, water and required medications to last at least three days in the event that a tropical storm does develop and heads this way.

“Please stay tuned to local TV and radio stations for updates through the weekend and prepare accordingly,” he said.

To get ready, in case a hurricane heads this way, the NHC’s website lists how to get prepared. Visit the site at http://www.nhc.noaa.gov/prepare/ready.php.

APD: Case remains under investigation An Atmore juvenile was shot in the leg early Sunday morning near Brooks Lane, according... read more