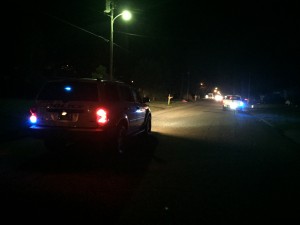 Shown are Atmore patrol vehicles on 4th Avenue earlier this evening, where an Atmore man was captured after fleeing from law enforcement. | Andrew Garner/Atmore Advance

An Atmore man is in jail for fleeing and attempting to elude police officers after a traffic stop on 4th Avenue earlier tonight.

APD Chief Chuck Brooks said an officer initiated a traffic stop, and Rod Lee of Atmore, bailed out of the car and ran.

“He was later captured and arrested for fleeing and attempting to elude,” Brooks said.

Brooks said Lee also failed to obey law enforcement officers during the stop, and he was found hiding in a shed off of 4th Avenue.

Officers with the APD blocked off the intersections in the area of 4th and 5th Avenues, near Church Street at around 8:30 p.m., and Lee was captured between 9:15-9:20.