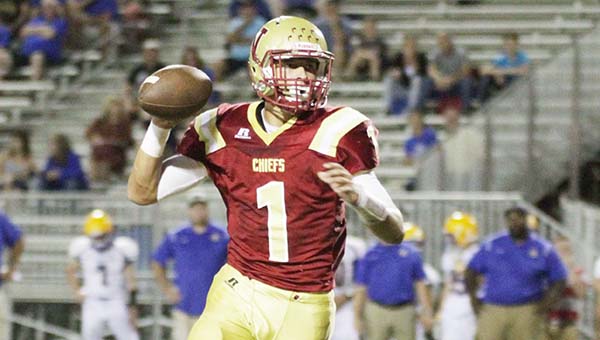 Give the ball to Luke Ward.

That was the plan for Northview as the Chiefs defeated Chipley, Fla. 41-6 in Bratt tonight.

Ward rushed for 253 yards on 11 carries and scored three touchdowns. He threw for 216 yards and two touchdowns.

“He had great blocking, and made great reads,” NHS head football coach Derek Marshman said. “We run a lot of the option with different looks. The offensive line did a great job of making blocks at the front and then down field.”

Ward’s touchdown passes were two Rayvon Bush and Josh Smith.
Chiefs receiver Neikel Robinson also had a good night with a pick six on the first series of the game. He ran it back between 65-70 yards in the first quarter, Marshman said.

This was Robinson’s third game of the season. He missed the preseason game against J.U. Blacksher because he had to get some teeth pulled.

“We made an effort to get him the ball a little more,” Marshman said about Robinson. “Outside of Luke, he’s the second best playmaker. He did a good job for us.”

“It was a good night for us,” Marshman said. “We were able to start fast. Having a 21-0 lead in the first quarter is always big for us. That was huge for us.

“This was good for our kids. We really hadn’t played a good first half all season,” he said. “That was a real confidence boost for us, and it was good to play a team similar in size.”

The Chiefs (2-2) will be traveling the next two weeks as they go to Vancleave, Miss. next week, and then to Maplesville, Ala. on Sept. 30.