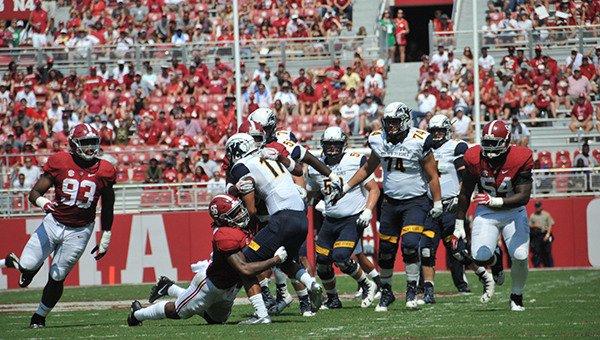 TUSCALOOSA – On a hot and steamy Saturday, Alabama played cool and collective in a 48-0 rout over Kent State at Bryant-Denny Stadium.

The Crimson Tide beared the heat well throughout the game, and got ahead early to set the tone. Temperatures were in the 90s with minimum cloud coverage.

“The goal going into this game was to play a complete game,” Alabama head football coach Nick Saban said. “We started fast and finished. I think we probably did that as well as we’ve done all year. The players were focused. We had three straight scoring drives right off the bat.

“The first play on defense, we didn’t execute exactly right, and they made a big play, but we got a stop,” he said. “We were pleased with the fact that we got to play a lot of players. We almost played a whole quarter and a half of a lot of different players. Maybe there were a few more we wish we could have played as well. Overall, I’m pretty pleased with the way we played.”

Crimson Tide quarterback Jalen Hurts rushed in from 20 yards less than 3 minutes into the first quarter. Adam Griffith supplied the extra point, and Alabama led 7-0 with 12:14 left in the opener.

The Golden Flashes couldn’t get anything clicking on offense as the Crimson Tide defense put a stamp on the run and pass games.

Alabama went ahead 21-0 in the first quarter because of freshman running back Joshua Jacobs’ two rushing touchdowns from 1 and 24 yards.

“He (Joshua Jacobs) did a nice job today,” Saban said. “B.J. Emmons got to play a little bit more. We would have played Bo (Scarbrough) a little bit more, but he got a little banged up and could have gone back in and played but we just left him out. He’s got a thigh bruise and could have gone back in the game, but we would have liked to play him more as well. Those three guys will be the guys that have to get the reps if Damien (Harris) is unable to go, but they have all played a significant amount and I think they can do a good job for us.”

In the second, the Crimson Tide widened the berth on two field goals from Griffith from 28 and 48 yards; a 34-yard touchdown pass to senior tight end O.J. Howard from Blake Barnett; and a 75-yard punt return from Xavian Marks. Alabama led 41-0 at the break.

Mack Wilson added a 1-yard touchdown reception from Hurts more than midway through the third as Alabama went ahead by 48.

KSU drove the field on one offensive series, threatening in the red zone, but redshirt freshman Deionte Thompson made a last-ditch effort play to keep the Flashes from the end zone.

“Well, we are disappointed with our performance,” KSU head football coach Paul Haynes said. “I thought that we would actually play better. There were a lot of times we kind of gave them plays and weren’t being very disciplined. There are things that we have to work on and we have to make sure to work on them this week and get ready for Akron. I commend Alabama, they are a good football team, a great football team, and they are kind of what we expected.”

Jacobs rushed for 97 yards on 11 carries to lead Alabama. Hurts had 54 yards and a score, and B.J. Emmons tallied 51 yards on eight carries.

Howard had three receptions for 60 yards. Cam Sims had four for 54 yards.

Alabama hosts Kentucky next Saturday. Kick off is at 6 p.m.