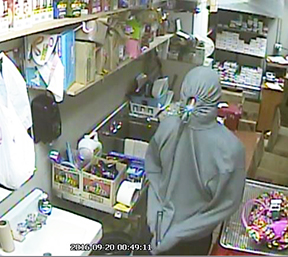 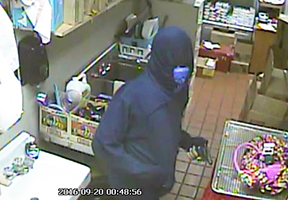 The Flomaton Police Department is asking for your help with information on two armed robberies that took place recently.

At approximately 12:45 a.m. on Sept. 20, two armed subjects entered the Texaco Station in Flomaton and held the clerk at gun point, according to the FPD.

Davis said the other robbery occurred this morning at approximately 1:40 a.m. at the Kangaroo Station in Flomaton. Two armed subjects entered the station and held the clerk at gun point as well.

“The Flomaton Police Department believes that the same persons are responsible for both robberies,” Davis said. “During the robbery of the Texaco Station, the suspect in the gray jacket can be heard calling the suspect in the blue jacket ‘Steve.’”
The Town of Flomaton has set up an email address for any tips in reference to the robberies or other crimes. The address is crimetips@flomatonal.org. You can also contact the FPD through its Facebook page or by calling 251-296-5811.

Two confidential individuals have put up a $1,300 reward for information leading to the arrest of the two suspects.

The two suspects are armed and should be considered quite dangerous.