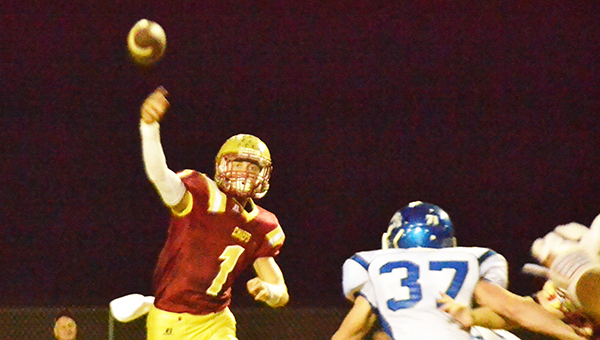 With the Class 1A, Region 1 (District 1) win, NHS clinches a spot in the postseason.

Ward said homecoming had a lot to do with the win, but in the end, he just came out and played his game.

“I just came out here and pay football,” he said.

The Chiefs had an abysmal first half, committing penalties on a frequent basis.

Trailing 6-0, NHS got on the board in the second quarter with 6:30 left on a 6-yard TD rush from Ward. With the extra point try from Seth Killam, the Chiefs led 7-6, and it remained that way until halftime.

Throughout the season, NHS has played better in the second half, which it did tonight. However, the start of the third quarter didn’t go as planned for the home team.

Jay’s James Eddings, who had two scores on the night, found pay dirt on a 16-yard rush with 8:04 remaining in the third quarter.

The Royals’ momentum kept going less than a minute later after Ward threw a 45-yard pick six. The Chiefs trailed 19-7.

Ward said at this moment he got mad at himself and a coach came over and told him to pick his head up.

“I took a second to go over to the sideline and said a quick prayer,” Ward said. “I asked Him to help me to get back in my game, and back in my groove.”

Ward found his groove a short time later when he found Robinson on a 37-yard connection. With the PAT, the Chiefs cut the lead to 19-14 with 4:55 to go in the third.

In the fourth quarter, Robinson caught a long pass to set up a 5-yard TD rush from Ward, and followed the big play with an 86-yard scoring reception with 8:24 to help the Chiefs get out of reach and in full control. 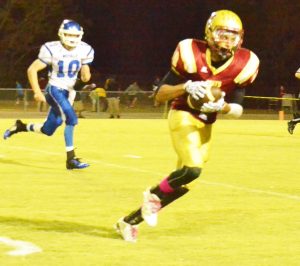 “Coach told me in the locker room to go out and play my game, and fight hard,” Robinson said. “We didn’t play that well in the first half. In the second half, I had to come out and ball out for my team, and make big plays like we needed.”
Ward put the game out of reach after returning a pick six some 50 yards to go up 34-19 with less than 8 minutes left in the game.

JHS, who played a stellar game and worthy of a hand shake, didn’t go away as Connor Moye found Reid Kelley for a long 78-yard scoring pass to cut the game to 34-25.

To seal the deal, Ward scampered 21 yards for a score with 1:11 remaining.

NHS head football coach Derek Marshman said while it was a win, it wasn’t pretty.

“A lot of credit goes to Jay,” Marshman said. “They played their tails off. They outplayed us for almost four quarters. There was very little time when I thought we outplayed them effort and execution wise. It wasn’t pretty, but we’ll take it. It assures of a postseason berth.”
Marshman said he thought his quarterback responded well after throwing the pick six.

“He had a touchdown run, and an interception return for a touchdown,” he said. “That’s been a problem not only for him, but other guys in the past. That was a big play. It was a huge play. They went up by two, got a turnover and he made a big play.”

On Robinson, Marshman said his receiver made the big plays when he needed to.

“He makes plays for us in the passing game,” Marshman said. “Sometimes he’s open. The touchdown we went ahead on it was blanket coverage. He went up and made a play.”

This is the seventh straight year the Chiefs have gained a berth in the postseason.

NHS will host Walton, Fla. next week for its senior night and final regular-season home game of the year.