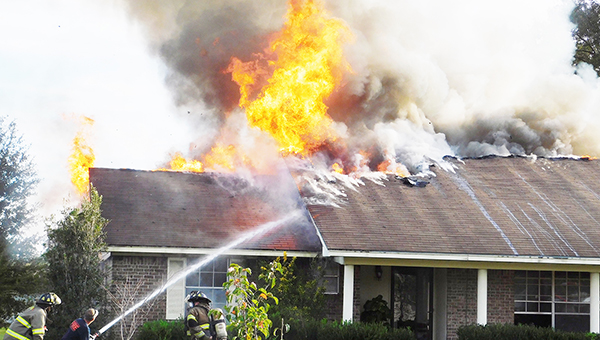 The Atmore Fire Department was called out to a structure fire at 4:35 p.m. at 1537 Rockaway Creek Road, Chief Ronald Peebles said.

“The owner was cutting his grass, and put his lawnmower on a carport, where he usually puts it in case of rain,” Peebles said. “He was weed eating, and the next thing he knew, his lawnmower was fully involved, and the fire got up in the attic of the east end of the house.”

Peebles said the fire shorted enough wires to catch the west end of the house, too.

“We had two sets of origin on the house,” he said.

Peebles said with mutual aid from the Poarch Fire Department and Escambia County, Fla. Station No. 15, firefighters were able to attack each end of the house.

“Once we had enough people, we deployed one master stream line and three smaller attack lines,” Peebles said. “We were scattered among the house and worked the fire back to the middle.”

Peebles said the house was declared a total loss, and Red Cross was called to the scene.

“We were able to salvage some of their personal belongings,” he said.

No one was injured as a result of the blaze, and firefighters were called back to the scene at around 11 p.m. because the fire had rekindled, Peebles said.

Peebles said Atmore Ambulance was also on scene, and the emergency service monitored the firefighters fighting the blaze.

Last Friday, Atmore firefighters were dispatched to a residence on Meadows Drive for another fire.

Peebles said the owner, who had just moved into the house a week prior, was baking a cake and accidentally turned a stove eye on with a pan of grease.

Peebles said the fire destroyed the kitchen and living room, but was prevented from affecting the rest of the house.

“The fire never penetrated the attic,” he said. “We were able to salvage a lot of her stuff.”

The AFD also responded to three other fires, one last Thursday at a trailer on Terrace Street, which was a total loss; a small fire on Patterson Street on Friday; and a brush fire on West Brook Lane.

Know who is running on Nov. 8?

Escambia County voters will decide the outcome of two judge races and a county commission race when they go to... read more