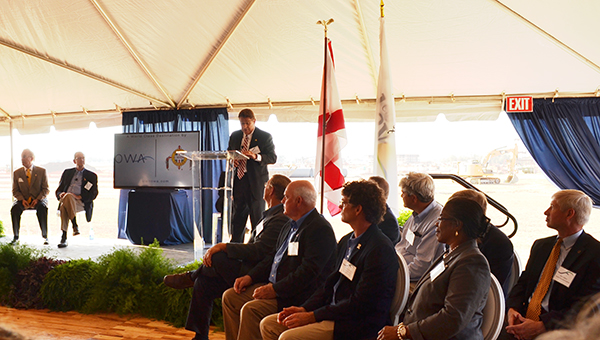 That was the sentiment behind the Poarch Creek Indians’ unveiling Nov. 2 of plans for a first-class, family-friendly tourist destination currently under construction on the Foley Beach Express.

State dignitaries, local officials and guests were present to hear the development’s name, which is Owa. Owa means “big water” in the Muscogee Creek language, and refers to the 14-acre lake at the center of the project that will feature a themed amusement park, a 150-room Marriott Town Place Suites hotel and restaurant and shopping destinations.

“This is a field of dreams,” PCI Tribal Chair and CEO Stephanie Bryan said. “This is just an example of what government-to-government partnerships can do in the state of Alabama.”

Creek Indian Enterprises Development Authority President Tim Martin said PCI, which is the primary investor in the development, did no less than six economic evaluations on the project.

“Each of those evaluations that was done independently came back and said this area was grossly underserved,” Martin said.

Once completed, the Owa development will create approximately 3,500 jobs and will boost tourist spending in south Alabama by 7 percent, according to a release.

The Owa development is 520 acres, and lies adjacent to the City of Foley’s sports tourism complex, which features 16 state-of-the art outdoor fields and a 90,000 square-foot indoor events center that is slated to open next summer.

“For every visitor, Owa will provide a top-notch experience,” Martin said. “It is an added benefit that families who come to Foley for sporting events will also have all of Owa’s offerings available to them. We believe that this is a winning combination that will have families coming back to Alabama for years to come.”
Owa is located just off of the Foley Beach Express and County Road 20, and is just 9 miles from Gulf Shores and Orange Beach. The area draws a steady 6.2 million tourist each year.

At present, the development is under its first phase of construction. The first Tribal phase of investment will cost in excess of $240 million, Martin said.

Phase one includes the 150-room hotel, retail and dining spaces, amusement park and lake that will open in summer 2017.

Future plans include a waterpark, additional hotels, a condominium complex and a resort level RV park.

The total capital investment for all Tribal phases will be more than $500 million.

Two people are dead in a murder-suicide in Flomaton Tuesday. The ALEA state bureau of investigation, at the request of... read more