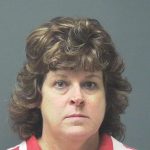 An Atmore woman has been charged with murder, following a domestic dispute with her husband at a residence on Ada Bell Road Sat., Nov. 5.

“Deputies responded to find a 46-year-old Indian male with an apparent single gunshot wound to his person,” Lambert said in a press release. “The subject was identified as Eric Leon Rolin.”

Lambert said Rolin was pronounced dead at the scene by medics, and that Kimberly Hardy Rolin, 47, also of the same address, told deputies that a domestic dispute had taken place between the two.

“Mrs. Rolin was taken into custody and charged with an open count of murder,” he said. “Deputies have responded to domestic violence calls at the residence in the past.”

Lambert said the case is ongoing and will be turned over and released to the district attorney’s office. Additionally, the case will be presented to the next grand jury in January or February, he said.

Because of staff shortages at William C. Holman Correctional Facility just outside of Atmore, the Alabama Department of Corrections announced... read more