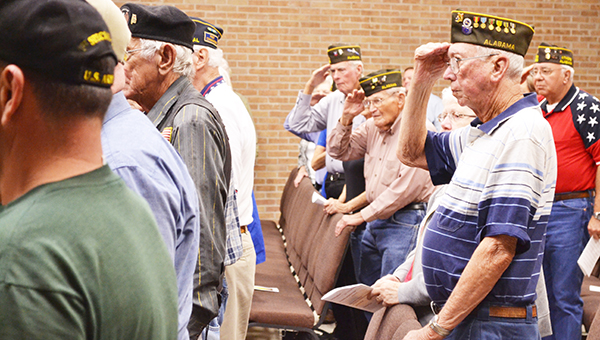 With smoke everywhere in a B-29 bomber in 1945 and suffering from severe burns to his face and torso, Staff Sgt. Henry E. “Red” Erwin knew he had to get the white phosphorus bomb out of the plane and fast.

Erwin clutched the bomb under his armpit like a football, passed his commanding officer who was observing the mission and said, “Pardon me, sir,” before thrusting the bomb out of the window and out of harms way.

This was a part of a story Erwin’s son, former State Sen. Hank Erwin told at the City of Atmore’s annual Veterans Day program on Monday.

Erwin said because of his father’s bravery and with the help of his commanding officer’s recommendation letter, Erwin Sr. received the Medal of Honor.

“Usually, it’s a year-long process,” Erwin said about the awarding of the U.S. military’s highest honor.

Erwin said his father was an airman in the United States Army Air Force as a radio operator.

“He wanted to be the best radio operator there was,” Erwin said.

Erwin flew on the B-29 bombers and it wasn’t uncommon for him to go on 24-hour missions.

“My dad said it would be 12 hours of boredom and 30 minutes of terror,” he said.

On any given mission, there would be several B-29s in a group carrying out their orders.

Erwin said it was usually his dad’s plane that led the missions.

On any given mission, it was Erwin’s dad’s job to release white phosphorus bombs. White phosphorus bombs burn quickly and produce a large amount of smoke. The canister would have to be triggered by hand and released in a tube under the seat of the radio operator.

“The third one (bomb) got stuck in the tube, and it shot back up in the airplane,” he said. “The bomb burned his ear and hair off.”

With severe burns covering his upper torso and head, Erwin said his father instantly became aware that if he doesn’t do something quick, the plane would go down.

Erwin said his father managed to find the white-hot bomb, clutch it to his chest and tried to get to the cockpit. Smoke filled the cabin and the plane started diving toward the water.

Erwin said his father, knowing that the bomb was still quite hot, picked the bomb back up a second time and got it out of the window. The smoke cleared and the pilot got the plane out of a dive just in time.

After a 6-hour flight, Erwin’s father was immediately sent to the hospital. In total, he had 44 plastic surgeries and spent 2-and-a-half-years in the hospital.

Medal of Honor recipients are awarded their medal at the White House. However, after President Harry Truman signed off on the awarding of the medal and it was flown to Erwin’s hospital, where it was laid gently on his chest.

Erwin gave three pieces of advice for those who come across a veteran.

“The first one is to always show respect to the veteran,” he said. “They earned it.

“The second is always show appreciation because we sleep good at night because of them,” he said. “By shaking their hands and saying thank you brings tears to their eyes.