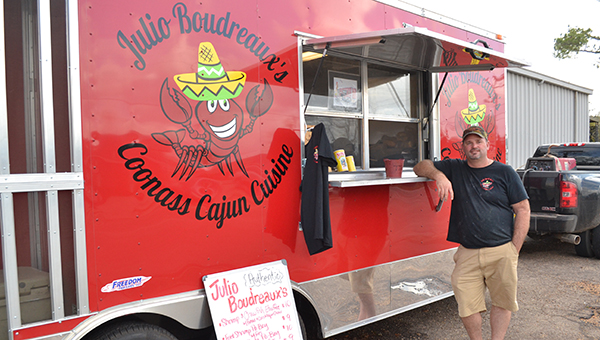 Deep in the Louisiana marsh of Forked Island, Paul Uriegas learned the way of coonass cooking.

Uriegas recently opened a food truck in Atmore, called Julio Boudreaux’s Coonass Cajun Cuisine. The food truck has been open for just over a month.

Uriegas said his love of cooking came from his mother, Vickie.

“I loved watching my mom cook,” he said. “She cooked everything from Mexican food to coonass food; to all kinds of stuff.”

When asked what coon-ass food is, Uriegas said it’s basically gumbo, po-boys and etouffe, among other food.

A welder by trade, Uriegas said the idea of opening a food truck began two or three years ago.

“We’ve (Michelle, his wife) been talking about it for two or three years,” he said. “We just decided to do it.”

In addition, Julio Boudreaux’s has been adding to its menu with food fare such as chili, pirogue party po-boy and shrimp po-boy with etouffe sauce.

The average price for a meal, which comes with a piece of bread or crackers, depending on the menu selection, is around $8.

Julio Boudreaux’s will be holding an open house and ribbon cutting tomorrow night from 5-7:30 at Heritage Park.