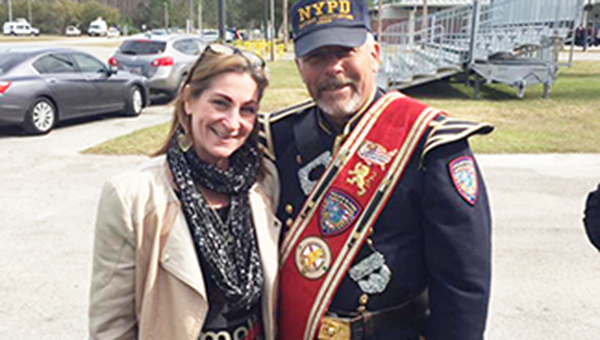 An Atmore woman will be marching in the 58th Presidential Inauguration Parade in Washington, D.C. on Jan. 20, where President-elect Donald Trump is slated to be sworn in as the next leader of the free world.

Wanda Mason, who lives in Palm Coast, Fla., is also leading a group of cops and firefighters as a member of the band’s color guard, and will be marching in honor of Kenneth Bettis, a former Alabama correctional officer who was killed while on duty at Holman prison in September. The group of cops and firefighters are in a band called the Coastal Florida Police and Fire, Pipes and Drums.

“I’m so excited,” Mason said. “It’s just such an honor. Everybody’s tickled to death. Of course, we’re going to be representing the state of Florida.”

Mason said marching for Bettis, who the band is also marching for, is special to her because her sister is a correctional officer.

“This is in respect to her as well,” she said.

Mason is the daughter of Jimmy Mason, a well-known fixture at the farmers market in town and local farmer. Mason attended Earnest Ward High School and graduated in 1985.

The band is comprised of active and retired law enforcement officers, firefighters, EMS and military veterans, and was established in 2000. The band has played in parades in Savannah, Winter Park, St. Augustine, Disney and many others, but this will be its biggest appearance, Vincent Gough, the band’s public information officer said.

Gough said band members talked about performing in the parade “off hand.”

“Prior to the election, a couple of band members were talking,” he said. “They half-heartedly said, ‘wouldn’t it be great to be in this?’

“I sent in the application to the Presidential Inauguration Committee,” he said. “I had to let the cat out of the bag because I learned about the approval a week and a half ago.”

Along with Mason, each member of the band will be wearing a mourning flag with the name of a fallen officer, Gough said, adding that Bettis’ death hit close to home with Mason.

“Our band will be dedicating the march to our fallen brothers from all around the country that have paid the ultimate sacrifice in 2016,” he said.

In addition to preparing for the parade, the band is also raising money for the trip’s expenses. The band raised approximately $15,000 in a matter of two weeks, Mason said.

Those who would like to support the band can donated through its GoFundMe page and at a fundraiser on Jan. 8, 2017.

Ferguson retires after 23 years as USPS clerk in Atmore

Charles “Chuck” Ferguson worked as a clerk at the U.S. Postal Service in Atmore for more than 23 years. |... read more