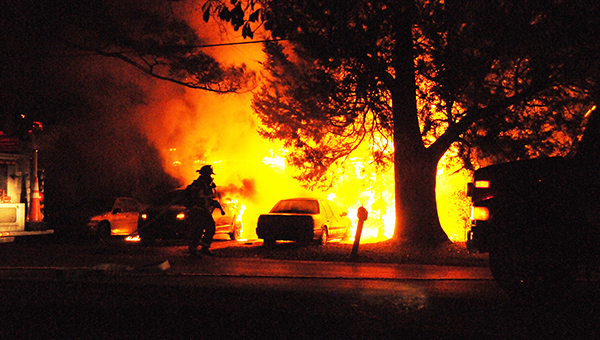 AFD officials said space heater was cause of fire

A fire claimed an Atmore home on Liberty Street last weekend, according to officials.

Atmore Fire Chief Ronald Peebles said the fire occurred at 206 Liberty St., and the cause was related to a space heater.

“The residents had an electric space heater plugged up in the front corner of the house,” Peebles said. “The heater shorted out, and the lady saw it after it shorted out.”

Peebles said the resident saw the fire and her and the rest of the residents evacuated the house.

Firefighters arrived on scene a short time after 11 p.m. on Dec. 30, and used an interior attack on the house.

“We worked out way through the front door,” Peebles said.

In the front yard of the house, cars were also susceptible to the fire, one of which caught fire.

Peebles said firefighters did well to put the fire out, and that Red Cross was called to help the family.

Poarch Fire Department also responded to the scene as well.

In a separate, but related incident to the house fire, an Atmore fire engine was involved in a single-vehicle wreck just down the road from the Liberty St. fire, according to Alabama State Troopers.

The truck was traveling east on Carver Ave., the Troopers’ report said, adding that the driver of (the fire truck) was driving too fast for the curve, and ran off the left side of the roadway.

As a result of leaving the roadway, the truck overturned and came to an uncontrolled rest in a ditch.

The AST report indicated that the driver, along with the passenger, were returning from a call when he missed the road after applying the brakes.

The accident occurred at the intersection of Carver Ave., Pouncey Rd. and Nall Rd.

Jerry Glenn Kelley and Thomas Yoho were taken by Atmore Ambulance to Atmore Community Hospital for treatment of minor injuries.