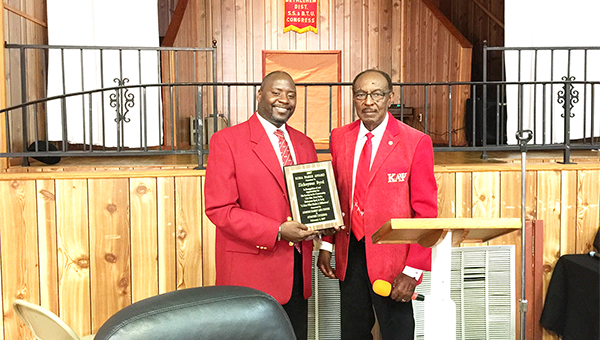 Dr. Zickeyous Byrd, left, is presented with a plaque for his contributions to Atmore’s education system by Dr. Ullyesses McBride. | Blake Bell/Atmore Advance

Black History Month kicked off in Atmore Saturday as a crowd gathered at Greater Mount Triumph Missionary Baptist Church to celebrate the birthday, life and legacy of the late Rosa Parks.

Saturday’s 11th annual Rosa Parks Prayer Breakfast brought together residents from across the Atmore area, as well as elected officials, local pastors and visitors from as far away as Detroit. Their goal: to enjoy a hot breakfast while honoring the memory of the woman known as the mother of the Civil Rights movement.

Serving as this year’s keynote speaker was newly elected mayor of the City of Selma, Darrio T. Melton. A former member of the Alabama House of Representatives, serving District 67, Melton said the opportunity to work in a city with such a strong connection to the Civil Rights movement is both an honor and a privilege. Melton said Parks’ courage embodies the movement that has come to define Selma.

“Imagine only 100 miles away from Atmore, back in 1955, in the underbelly of America, something was brewing,” Melton said, referencing Parks’ refusal to give up her seat on a Montgomery bus to a white passenger. “This was an act of courage from a seamstress who only weighed 110 pounds.”

Melton said one of the many lessons that can be learned from Parks’ historic act of civil disobedience is that even actions considered to be small can have a large impact.

“It’s interesting to me, when you think about the image of courage,” he said. “I never thought that sitting down was an act of courage. I believe God gives us all Rosa Parks moments, where just the smallest act can change the world.”

In addition to Melton’s keynote address, Saturday’s audience also heard special music by Greater Mount Triumph pastor, the Rev. Willie Hawthorne; an introduction of the keynote speaker by Dr. Ullysses McBride; an invocation from Troy Ephraim, former mayor of the City of Prichard; a welcome from Escambia County Board of Education Chairman Willie J. Grissett; an occasion from Conecuh County Superintendent of Education Dr. Zickeyous Byrd; an introduction of elected officials by Escambia County Commissioner David Quarker; an update on the City of Atmore by Mayor Jim Staff; the awarding of door prizes by Teresa Dees; and remarks from Rosa Parks Prayer Breakfast founder and organizer Lillie Johnson, who also serves as director for Atmore Family Life Center.

Byrd, who formerly served as principal for both Escambia County Middle School and Escambia County High School, said the event is something he looks forward to and praised Johnson’s continued hard work in the community.

“It’s great to be back here,” he said. “I’m so proud of Lillie Johnson, a pioneer herself. She started this breakfast to celebrate a woman we all know and love.”

Additionally, a pair of longtime contributors to the Atmore community was recognized for their efforts. Alton Watts was honored with a proclamation by Staff, while Voncile Stallworth received the Rosa Parks Award and was recognized with proclamations from both the office of Alabama Gov. Robert Bentley and the Alabama House of Representatives, which were read aloud by Rep. Alan Baker. Byrd was also recognized for his contributions to Atmore’s educational system.

Howell The Alabama Department of Corrections is looking for an inmate who escaped from the Mobile Work Release Center Tuesday... read more