An Escambia County Middle School teacher was arrested on a possession of marijuana charge Friday morning, according to the sheriff’s department. 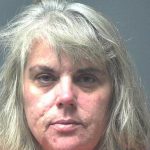 Kimberly McKay Downey, 49, of Atmore, was arrested and taken into custody for possession of marijuana II.

“The principal reported that there was a strong odor of what she believed to be marijuana coming from a specific area inside the school,” Lambert said. “Sheriff’s deputies and the department’s K-9 unit were dispatched to the school.”

Lambert said as deputies entered the school, they also detected the odor that they believed to be marijuana in the hallway of the school.

“The K-9 began to search the school and alerted on a classroom,” he said. “The students were removed from the classroom, and a search was done of the room. The K-9 alerted on a bag that was located under the teacher’s desk.”

Lambert said deputies asked the teacher (Downey) whom the bag belonged to, and replied that it belonged to her.

Lambert said the case is still under investigation.

The Atmore City Council awarded a bid for the industrial access road in the Rivercane Development at its meeting on... read more