An Atmore man was captured by a U.S. Marshal’s Fugitive Task Force Tuesday afternoon in Baldwin County, according to the Flomaton Police Department. 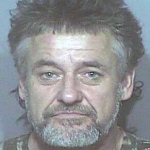 Buddy Lee Roberson, 48, was wanted on possession of a controlled substance (methamphetamine), domestic violence and possession of drug paraphernalia charges by the FPD.

By his arrest, he was also charged with possession of a controlled substance, according to reports.

Roberson was booked into the Baldwin County Jail in Bay Minette without bond.

More details on this story will be posted later.

Case under investigation by state fire marshals Fire officials are suspecting arson was the cause of two trailer fires on... read more