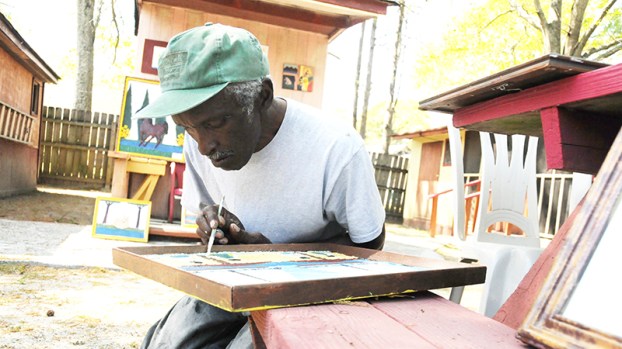 Under a canopy of trees in his backyard on a sunny afternoon, Lester Holt works on one his latest creations.

Also known as The Mud Man, Holt is a folk artist who uses a mud mixture from Alabama dirt to form and paint different subjects.

Holt said he started drawing and sketching in third grade.

“I met this old man called Jimmy Lee Suddith,” Holt said. “I knew him because I lived next door to him in Fayette. He saw my paintings and told me he liked them.”

Suddith was a well-known folk artist who used mud to paint different subjects as well.

“He told me what ingredients that I needed to go into the woods to get,” Holt said. “I was the only one he told.”

Holt said he went to the woods, had to get red dirt, chalk and clay and mix them all together. He said it took him four years of experimenting to get the mixture right.

Once the mixture is made, Holt takes the mud and sometimes forms a 3-D sculpture on the canvas. Once dry, he paints over it with a water-based paint. Before starting, Holt puts down mud for the background and then uses a calk gun to help lift out the figure he’s creating.

“I use all kinds of materials off the trees,” he said. “I use nut squirrels eat for eyes.”

He said he usually creates figures of people, country, people in the country, horses and cats.

Much like Suddith’s art, Holt is essentially making something out of nothing.

“He went out in nature, and he didn’t put no chemicals in his paint,” Holt said. “He got his stuff rom nature. He used natural colors.”

Holt, originally from Atmore, met Suddith after moving to Fayette from New York. He was a sponsor for those recovering from alcohol and drug addiction.

Once he moved back to the south, Holt said it was kind of like a culture shock to him after being in NYC for so long.

Holt said his favorite piece of work he’s done is of a woman with two children.

“She comes out that much on the wood,” he said. “The have a dog in the middle. From that wood is that thick, and it looks like it’s coming out of the wood. I think that’s one of my best.”

Holt said he uses his art skills because it’s a form of therapy.

“It keeps from my mind from traveling out,” he said.