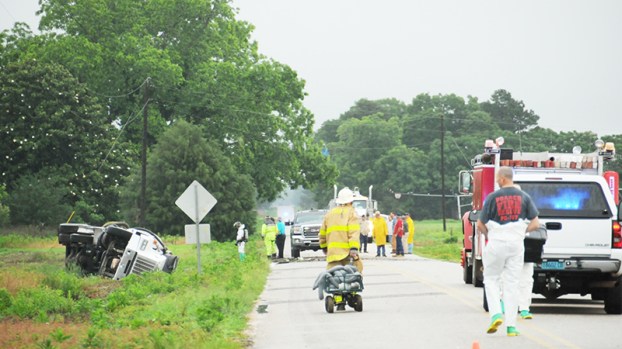 “It left the roadway and overturned about 150-200 yards east of Hwy. 21 on Wayside Road,” Adams said. “He spilled some fuel into the ditch and motor oil from the crank case.”

Adams said officials are confident just under 200 gallons were spilled.

“We’ve got an environmental crew on site cleaning it up,” he said. “They’re recovering oil in the water.”

Adams said the truck’s company sent another tanker to recover the fuel that was still inside the overturned truck. In fact, holes were drilled and then the fueld was transferred.

Adams said Tuesday afternoon that the truck was upright and wreckers are working to get it out of the ditch.

He said the crew will deploy additional booms to catch any remaining fuel and oil from the ditch.

Wayside Road will remain closed as crews continue the clean up.

Escambia County played hard during its spring football game at Flomaton, but the Blue Devils have a lot of work... read more