An Atmore man has been charged with arson after setting his mobile home on fire Tuesday afternoon in the Poarch Community, according to the Escambia County Sheriff’s Office. 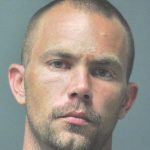 Chief Deputy Mike Lambert said Jason Paul Mitchell, 31, of 7135 Jack Springs Rd., was arrested and charged with arson II, domestic violence and domestic violence III (harassment) as a result of an investigation by the ECSO, the Poarch Police Department and the Alabama State Fire Marshall’s Office.

Lambert said the ECSO received a 911 call of a residential structure fire just outside Atmore in the Poarch Community Tuesday afternoon.

“The Poarch Fire Department responded to the scene,” he said. “Firefighters found a mobile home engulfed in flames. Deputies responded to the scene and received information that the fire was possibly started by a subject that was living there and had been into a domestic situation with his wife. The subject was identified as (Mitchell),” he said. “He made statements to people in the area about setting fire to the residence and property. Mitchell ran into a wooded area nearby the residence with a gun in an attempt to shoot himself.”

Lambert said deputies and Poarch police officers were able to disarm Mitchell and take him into custody without incident. He was transported to the Escambia County Detention Center in Brewton, where he remains.

Mitchell’s bond hearing is set for this afternoon.

Two at-large seats and the Tribal chairman’s seat are up for the Poarch Creek Indians’ Tribal election, which will be... read more