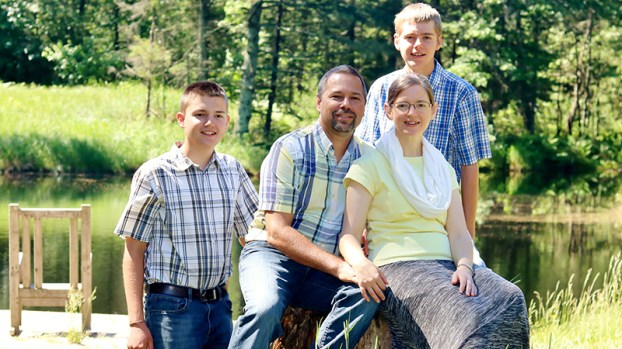 Stan Schrock is shown with his wife, Ruth, and two sons, Denver and Austin. | Submitted photo

Schrock moving to Peru to work in children’s home

Schrock of Atmore, along with his wife and children, is moving to Nauta, Peru, to serve with the La Roca Missions at the mi Refugio casa hogar Children’s Home. He leaves in November. To help with expenses, the Schrock family is holding a spaghetti dinner at Grace Fellowship on Sat., Sept. 23. Eat in or carry out, and plates are by donation.

Schrock said back in January, he went to Peru on a trip, and ever since then, he had always felt a tug to serve there.

“That was an exploratory trip,” Schrock said. “It started with a friend of mine who actually used to be an employee of mine in 1999. His name is Nathan Sears. He was from down there and came up to the states to work. He worked for me six months and went back to central Mexico.”

Schrock said both times Sears went back to Mexico, his businesses failed and his friend felt the call to go into ministry.

Two years ago, Schrock said he was thinking about taking a mission trip down to Mexico with his sons, Austin and Denver. During this trip, Schrock said he started to feel the tug to work in missions.

“I thought of my friend Nathan down there and knew he had some mission work going on down there,” he said. “We went down a year ago in October to visit him in Mexico. While we were down there, he actually mentioned to me about working at a children’s home in Peru. I shrugged it off. I wasn’t looking to move and leave the ministry program here at We Care, where I am now.”

However, Schrock’s plans soon changed because the thought of Peru and working at the children’s home never left his mind.

“I came back home and it stuck there,” he said about the prospect of working in Peru. “A couple of months later, I called (Sears) and told him that Peru wouldn’t leave my mind and to let me know when he was going to go back down there. He told that he was going to be down there in January (2017).”

For Schrock, it wasn’t a good time to go as he was a class member of Leadership Atmore; We Care — where he worked — was holding its big event for prison ministry; and there was a thrift store convention coming up.

“It wasn’t possible,” he said.

Schrock spent five days in Peru just as an observer to see what the work was being done down there.

Schrock said it was confirmed to him through God that he was called to serve in Peru through many things.

What he’ll be primarily doing at the children’s home, which has been there since 2008, will be to help coordinate several projects. Most of the projects have been installed so that the people can be self sufficient.

“Since I’ve been down there, they’ve opened up a meat department down there,” he said. “They asked me to come manage that.”

Additionally, because Schrock grew up on a farm, he was also asked to help with agriculture and growing things.

When asked why he thinks God called him to serve in Peru, Schrock said he doesn’t know why.

“That’s one thing my friend Nathan asked me,” Schrock said. “He asked me what you feel God is calling you to do to me down here. All I know is God speaking to me directly to go down there and help with the home. He responded back, and said, ‘That is really good. That is where God wants you to be.”

Schrock is married to Ruth, and the couple has two children, Austin and Denver.