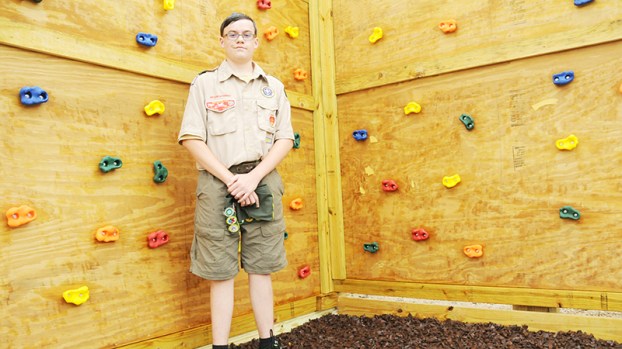 When deciding what he needed to do for his Eagle Scout project, it was a no brainer for Escambia Academy freshman William Howell.

Howell rebuilt the entire elementary school playground and built a climbing wall at the Canoe School.

A dedication and ribbon cutting ceremony for the playground was held Sunday afternoon.

Howell, who will earn his Eagle Scout badge in the near future, replaced most of the platforms on the playground, along with the structure on one of the slides, he said.

Additionally, Howell restrung the bridge because all of the wires were rotten to the point where it was a safety issue.

“My dad kind of came up with it with me,” he said. “We were walking around the school and asking the board what was needed. I wanted to do something for the school.”

Howell said it feels great to get the project done because his older brother, Andrew, completed his Eagle Scout project at EA as well. Andrew constructed a flag pole that sits between the track and softball fields.

Howell is the son of Banks and Michelle Howell of Bay Minette.