Fitzpatrick to be inducted in AISA HOF 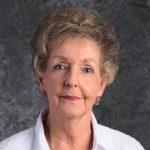 Fitzpatrick, along with the 10 other members of the class, joins a list of 106 other individuals in the AISA Hall of Fame.

The HOF’s purpose is honoring and recognizing those individuals who have made significant contributions to their schools and or to the association.

Fitzpatrick served as the school secretary for more than 20 years.

“She wanted one of her children to come here as a student,” Ragan said. “She was told that the class was full, and that if she could get so many other kids, another class could be formed.

“She went out and recruited kids and got enough to start a class,” she said.

Ragan said Fitzpatrick was the face of the school.

“There will never be another one like her,” she said. “I don’t know if there are words to describe Mitzi. She was one of a kind. She was the center of the school. We miss her greatly.”

The AISA HOF banquet and induction ceremony will be held at the Montgomery Marriott Prattville Hotel and Conference Center at Capitol Hill in Prattville, on Mon., Oct. 23.

The banquet and ceremony will start at 6:30 p.m.

Through collaboration between correctional officers at William C. Holman Correctional Facility and the state legislature, the memory and life of... read more