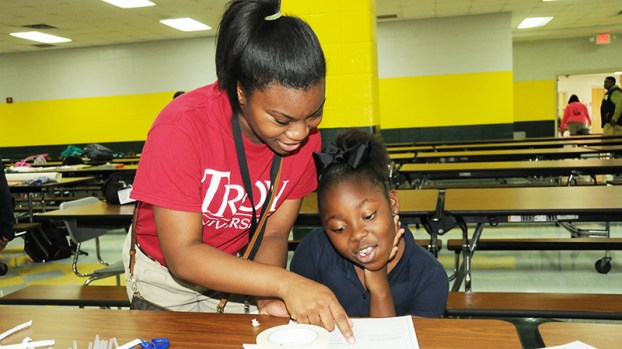 Lights are ‘on’ at ECMS

Before high school, Eboni Williams went home after school and did nothing.

That changed when she started participating in the 21st Century Program’s Project ASTEM at Escambia County Middle School.

Nowadays, the senior at Escambia County High School, is giving back to the current program at ECMS, which is being held Monday through Thursday from 3-5:30 p.m. at the middle school.

Williams, who is an Atmore Area Chamber of Commerce ambassador, said the program helped her in the long run because she’s now taking advanced classes.

“I was going home every day and not doing anything,” she said.

On Oct. 26, Mayor Jim Staff read a proclamation celebrating the Lights On Afterschool Day at ECMS.

The Lights On Afterschool program is a national program that impacts 28 million children whose parents work outside of the home, and some 15.1 million who have no place to go after school.

Lead After School Teacher Melissa Daniel said program is held to shed the light on the after school programs around the nation.

“It’s a federal program, or 21st Century Grant,” she said. “As a part of it, we have to meet with the parents to show what their students are doing after school.”

Daniel said students come to the program every week during the school year, when in session, and there is a program during the summer.

During the recent program, students participated in activities such as saving Fred the worm from drowning by coming up with a creative way of engineering an escape; and designing a catapult for pumpkin throwing, to name a couple.

Daniel said the program at ECMS is teamed up with the National Basketball Association, and partnered with the Cleveland Cavaliers.

Students who do well on their contract will be sent swag from the team, Daniel said.

The Atmore Public Library announced the winners of the writing and pumpkin contest from Williams Station Day on Tuesday. The... read more