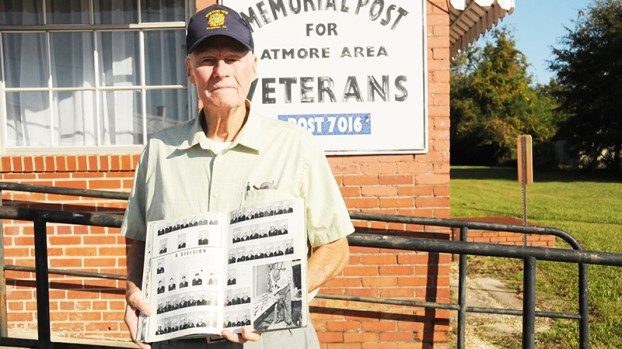 Answering the call of duty

Atmore resident and U.S. Navy veteran Jim Biggs felt like it was his duty to serve in the armed forces.

At the ripe age of 18, Biggs began his service aboard the U.S.S. Rochester, a cruiser outfitted with guns and other canons, in 1954.

Prior to starting his stint on the Rochester, Biggs went through boot camp in San Diego, Calif., and then went to pipe fitters school for three months.

Biggs recalls that he was a first-class swimmer in boot camp, which meant that he was at the top of his class.

“There were two guys who were first-class swimmer — me and a guy from Miami,” he said. “I could’ve went after boot camp to train swimmers for three months, but I elected not to do that because I was in pipe fitting school.”

Biggs finished second in his pipe fitting class, and was assigned to the U.S.S. Rochester, a Navy cruiser.

“Our home port as was Long Beach, Calif.,” he said. “On Oct. 29, 1954, I reported to the Rochester. I stayed on the Rochester for three-and-a-half years. We were oversees 21 months. There were three cruisers in our division, and they would go oversees in the Pacific (Ocean). Our ship was the flagship of the fleet. We were the flagship every year, which means the admiral came on our ship.”

Biggs served in the R Division onboard, which consisted of repairing any and all pipes on the ship.

“The battle stations were in damage control,” he said. “You do daily maintenance. We’d have to go by the restrooms and check all for leaks. Freshwater is a sacred thing on a ship because what happens is that the ship makes 40 gallons for every person on that ship. Twenty of those 40 are used to run the ship, which leaves 20 gallons for you.

“Ten gallons are used for laundry and cooking, and then that doesn’t leave but 10 gallons to bath and drink with,” he said. “You go into the shower and what you do is you wet down, cut off the water, soap down, cut on water and rinse off as quickly as possible.”

During his stay on the Rochester, Biggs visited many places, including Australia, Japan — Yokosuka was the homeport in Japan for the Rochester — Okinawa, Taiwan, Hong Kong, Saigon and others.

It was in Saigon that Biggs recalled a story about when an admiral came aboard the ship.

“We went up to a river, and it wasn’t a very big river,” he said. “We went up there to Saigon. The president of Saigon went on our ship.

“We stayed there a day or two,” he said. “As a matter of fact, when we left there, we had to bury our bow in one bank and then a tug pushed us around to get out of there.”

Usually when the admiral was on board, Biggs was responsible for getting everybody up at 6 a.m. for revile. Then, each sailor goes through quarters (inspection) and then resume normal duties the rest of the day.

Biggs was honorably discharged on April 10, 1958, when his tour of duty was over. He got a bus ticket and moved back to Atmore, where he’s been ever since. At present, he’s a member of the Veterans of Foreign Wars Post No. 7016 in town.

Biggs, who married Earlene and had three children, Linda, Sandra and Kathy, said he felt like it was his duty to serve in the military when he enlisted.

“I didn’t really think I did anything extraordinary,” he said. “I thought that (serving on the ship) was just my duty.”